U.S. Military to Postpone Promotions Due to COVID-19 Outbreak 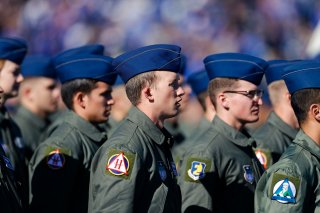 While millions of Americans now are being told to stay home and to maintain social distance during the on-going COVID-19 pandemic, for those in the U.S. military it is very much business as usual. However, those serving in the U.S. Army, U.S. Air Force and U.S. Navy will have to wait for any upcoming promotions.

In the past week, the three branches each announced that promotions could be on hold until further notice amid the outbreak.

On March 18, the U.S. Navy announced in NAVADMIN 072/20 – a naval administrative message that is usually released by a high ranking officer – as a further precaution to protect the health and safety of the force that it would suspend all selection boards until further notice. That message came from Vice Admiral John B. Nowell, the Navy's chief of personnel.

This will impact all officers and enlisted selection boards that had been set to convene at Navy Personnel Command (NPC) beginning on March 24. This includes all promotions, advancement, milestone and any other selection boards. The suspension of the boards was done to reduce the unnecessary risk of official travel to Millington, Tenn. where the boards would convene. The military has been working to address social distancing, as suggested by the World Health Organization (WHO).

"As the COVID-19 situation evolves, NPC will refine the board schedule and will promulgate additional guidance that ensures no eligible Sailor is disadvantaged by this action," said Vice Admiral Nowell.

It is estimated that nearly 16,000 sailors will be impacted by the suspension of advancements.

U.S. Army soldiers and U.S. Air Force airmen will face similar delays as both of those branches have delayed promotion selection boards. As of this week, the Army centralized selection boards will be suspended until May 11, but that date could still change based on the state of the pandemic.

"This is a prudent adjustment, and we will do everything possible to see that this shift in the timing of promotion consideration does not adversely affect promotion, schooling or critical career development for our Commissioned Officers, Warrant Officers and Noncommissioned Officers," said Army Lt. Col. Mary Ricks, spokesperson for Human Resources Command (HRC), as reported by Miltiary.com.

This week the Army announced that commanders are now authorized an alternative means to evaluate personnel during a monthly unit promotion board.

"With the exception to policy, commanders can conduct a promotion board within a virtual environment," Sgt. Maj. Mark A. Clark, the Army G-1 directorate of military personnel management, told the Army News Service. "It will be up to the command team to determine their proper means of communication."

The Air Force has announced that its master sergeant promotion board (20E7), which was originally scheduled for March 23, has been rescheduled for June.

"We realize the importance and impact promotion boards have on airmen's careers but, for health and safety, it's important we make these prudent adjustments at this time," said Maj. Gen. Andrew J. Toth, commander of the Air Force's Personnel Center (AFPC), via a service release. "Given the importance of promotion boards, we are working on a number of process adjustments and facility mitigations allowing us to hold future boards while complying with health and safety guidelines.

AFPC has noted that this delay does not impact the currently planned first "sew-on" increment, which remains scheduled for August 1. It will closely monitor record updates for the 20E7 promotion cycle.

Once board season resumes, a policy is being developed to ensure retroactive dates of rank can be set and allowances for back pay made, if necessary, after board results are eventually approved or confirmed by the Senate, ensuring no soldier or sailor is disadvantaged by the delay.