Is the U.S. Military Ready for a Hypersonic Weapons War? 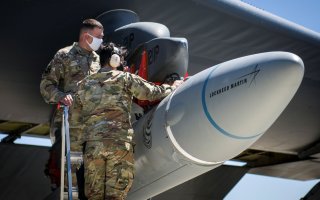 Skimming and bouncing along the upper boundaries of the earth’s atmosphere, just prior to descending upon targets while traveling more than five times the speed of sound, hypersonic weapons can travel thousands of miles to a point of attack in a matter of minutes.

The technology is almost paradoxical to a degree, as the unprecedented advantage it brings to offensive warfare is matched if not outweighed by a corresponding disadvantage: defending against hypersonics. If an attacking weapon transits too quickly from one radar aperture or field of view to another too quickly, then how can defenders establish any kind of continuous track on the target?

Unsurprisingly, the Pentagon’s emerging Space Force is working quickly to address this predicament, a circumstance not made easier by the fact that both Russia and China are currently testing and operating hypersonic weapons.

There are clearly a lot of aspects of the big challenge to defend against hypersonic weapons. From a space perspective, probably the biggest one is being able to identify and detect and track these things from space, in a timely manner and effective way, U.S. Space Force Chief Scientist Dr. Joel Mozer recently told reporters.

Hypersonic weapons are, in virtually every respect, a multi-domain threat, as they can attack targets at sea, on land, in the air and even in space. The speeds at which these weapons maneuver, and the distances they can cover quickly, introduce new dimensions of threat tracking challenges for weapons planners at the Pentagon. What if anti-satellite weapons traveled at hypersonic speeds? How might large platforms such as ships, ground command centers, armored vehicles on the move, fighter jets and even satellites be protected?

While it is often discussed that there is ongoing work in this area, many specifics are not likely to be available for security reasons, yet there are several interesting areas of defensive possibility which seem to invite speculation. Would a hypersonic interceptor need to travel at hypersonic speeds? A kind of hypersonic vs. hypersonic dynamic? Perhaps lasers traveling at the speed of light, should they have the requisite strength and range, be fast enough to hit, disable or even fully incinerate hypersonic weapons? Maybe there could be newer methods of networking otherwise segmented radar and missile warning systems together into a mesh of nodes or protective web able to follow or track the flight path of a hypersonic weapon? Efforts aligned with this concept, such as the Army’s evolving Integrated Battle Command System, are already progressing and showing promise, if even not specific to hypersonics. Certainly, the IBCS concept of operations, which seeks to merge, synthesize and network otherwise disparate defensive sensor and radar nodes spread across vast distances or swaths of terrain, might offer some relevant insight into the realm of the possible when it comes to hypersonic defense.

Given the complexity of the threat, and the pace at which potential adversaries are evolving hypersonic weapons, it is by no means surprising that Mozer said Space Force and Air Force Research Laboratory are working closely with the Navy, Defense Advanced Research Projects Agency and Missile Defense Agency to share developmental data and technologies with a mind to maturing interoperable, multi-domain defensive systems able to track and ultimately deter hypersonic attacks.