U.S. Military Tripwire Forces Can Save Taiwan from China 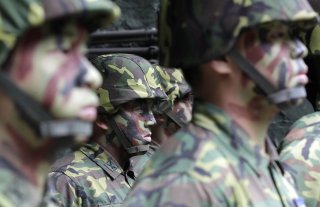 As an authoritarian China grows more belligerent—launching crackdowns against its own population while stoking confrontations with its neighbors—a democratic Taiwan finds itself increasingly in danger. To deter an attack on the self-governing island from the mainland, the United States should adopt a strategy it has successfully implemented elsewhere in the world: the deployment of tripwire forces.

While American presidents have supported Taiwan for decades with military arms sales, how the United States would actually react to a Chinese invasion is ambiguous. In 1995, then-Assistant Secretary of Defense Joseph Nye encapsulated this uncertainty when he responded to a question about a potential American response by saying, “We don’t know and you don’t know.”

Such strategic ambiguity made sense as long as the U.S. Navy could easily repulse any Chinese crossing of the Taiwan Strait. The problem is, this is increasingly no longer the case.

Specifically, China has developed sophisticated anti-ship missiles and other high-end capabilities able to threaten any American effort to relieve Taiwan by sea. As a result, the U.S. Navy would now need weeks or even months of heavy fighting to regain supremacy. Beijing may therefore conclude that the United States would be politically unwilling to pay the cost of rescuing Taiwan—encouraging a strike on the island.

Washington can avoid falling into such a trap through the deployment of tripwire forces.

By stationing a few thousand U.S. forces to Taiwan the United States can significantly complicate Beijing’s calculus. Specifically, Chinese planners would be forced to contend with the fact that any attack on Taiwan would be an act of aggression against U.S. forces, all but guaranteeing a much wider American military response.

Historically tripwire forces have a long track record of success as a tool of U.S. diplomacy. During the Cold War, a single brigade of U.S. Army soldiers was enough to deter dozens of Soviet divisions from seizing West Berlin. Similarly, the roughly thirty thousand American troops currently in South Korea have served to stave off aggression by Pyongyang, keeping the peace for nearly seventy years.

In fact, a non-trivial number of tripwire forces were once deployed to Taiwan for the same reason. President Dwight Eisenhower dispatched U.S. troops to the island following an attempted Communist invasion during the First Taiwan Crisis in 1955. They would remain there until 1979 when the United States formally recognized Beijing as the legitimate government of China. As a result, for more than two decades, Beijing would make no serious effort to retake the island, with only a brief skirmish in 1958 breaking the peace between Taiwan and China.

Critics may argue that sending troops back to Taiwan now would be needlessly provocative and risk a rapid counter-escalation by China. From this viewpoint, tripwire forces could actually make war more likely with Beijing.

Tripwire forces have also not always succeeded. British forces stationed on the Falklands, for instance, failed to prevent an Argentinian invasion in 1982.

Yet in every case America has deployed tripwire forces, conflict has been deterred. The United States is also not Britain of the 1980s; whereas London's shrinking military signaled—wrongly—to the Argentinians an unwillingness to actually fight, the United States today is ramping up its defense spending with an explicit focus on China.

More fundamentally, the case could also be made that Taiwan is not of sufficient American interest to justify risking American lives in its defense.

But this too is wrong.

If Taiwan falls to Beijing, then it would carry strategic consequences far beyond the island itself. A Taiwan under mainland control would radically alter the Asian balance of power and hand the Chinese military a new stronghold from which it could project power into the Pacific—complicating the defense of Japan and Guam.

Moreover, while Washington does not have an explicit alliance with Taipei as it does with Japan and South Korea, the perception of a U.S. commitment to the defense of the island is undeniable. If the United States were to stand idly by while China crushes Taiwan’s democracy, the effect in practice would be devastating for American credibility in the region.

The United States has embraced the concept of great power competition as the new basis for dealing with Beijing. But if Washington is going to prevail in this rivalry, new thinking about old problems like Taiwan is needed. Taiwan needs to be prioritized and protected as part of an American grand strategy. Five years ago, American tripwire forces on Taiwan would have been unthinkable; soon, however, they are likely to be indispensable.

James Beckwith is currently a Philosophy and Classics student at St. John’s College in Annapolis, MD and a fellow of the Hertog Political Studies and War Studies programs. Prior to college, he served in the United States Army for four years including a rotation to South Korea.