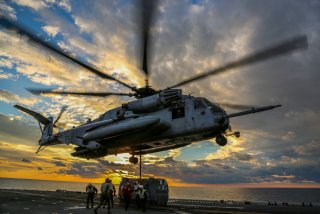 5) Implement a significant change to an Army major acquisition program. Currently, three Services use a variant of the V-22 tilt-rotor aircraft. The Army, however, insists on building its tilt-rotor from scratch. This is costly and time-consuming. The commander-in-chief should bring the Army into the DoD fold by demanding the purchase of the latest CV-22 version to replace the Future Long-Range Assault Aircraft program. This would save billions in developmental research. As an incentive, the commander-in-chief would offer $1 billion to this effort. The Army would benefit from the improvements made by the other Services, while taking advantage of an active production line.

6) Purchase another Arleigh Burke-class Flight III destroyer, specifically designed to fulfill the air defense role, for $2 billion. The Arleigh Burke is the workhorse for the Navy, and should continue for the foreseeable future. The Flight III design serves as the stopgap until the Navy can fill the role that aging cruisers are struggling with.

7) Lastly, the Army must complete upgrading its ground combat vehicles. Usually, this is a multi-year project. But in the light of increased adversaries, it should be completed sooner. $300 million is needed for sixty upgraded Stryker double V-hull combat vehicles with heavier weapon systems; $500 million would convert 168 Bradley vehicles to the new M-2A4 configuration; $300 million would purchase twenty-nine new M-1A2C Abrams tanks (about a battalion’s worth); all part of on-going programs.

The transfer of developmental funding to active, “ready” programs would require Congressional buy-in. But time can also be an enemy; thus, to keep our strategic advantage, it is worth the venture to shift our defense dollars to more meaningful projects. By shifting $10 billion dollars, the president could ease the burden upon the Navy to restore its ship-building schedule; it would help the Air Force keep its fourth-generation fighters ahead of contemporaries; and bring the Army forward in its long-term upgrading process. This shift may slow the development of futuristic weapons, or it may invigorate the program managers to operate more judiciously.

A shift of $10 billion dollars is a small number to Congress. But it is a valuable number in terms of maintaining our decisive edge over our enemies.

Samuel Arlington Page is a twenty-year veteran who served in Ranger, Cavalry, and Airborne units. He has written a novel about large-scale combat named, Freedom’s Promise: The American Invasion of Mainland China, available on Amazon.com. This article first appeared last month.