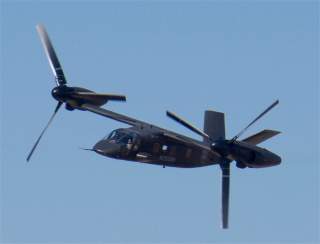 Key Point: Helicopters are the stealth vehicle of the future.

We will get the gear boxes and transmission in before we get those blades on,” Tobin explained.

As of January of this year, Bell engineers are 81-percent complete with the aircraft; the wing is attached and the wiring is put in, Tobin said. In the next few months, Bell engineers will begin installation of the gear boxes and the fuel tanks.