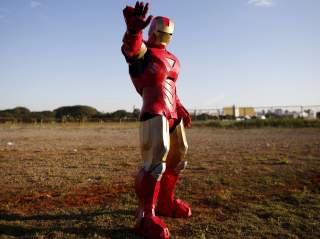 Long before Tony Stark took a load of shrapnel to the chest in a distant war zone, science fiction legend Robert Heinlein gave America the most visceral description of powered armor for the warfighter of the future. Forget the spines of extra-lethal weaponry, the heads-up display, and even the augmented strength of an Iron Man suit — the real genius, Heinlein wrote in Starship Troopers, "is that you don't have to control the suit; you just wear it, like your clothes, like skin."

"Any sort of ship you have to learn to pilot; it takes a long time, a new full set of reflexes, a different and artificial way of thinking," explains Johnny Rico. "Spaceships are for acrobats who are also mathematicians. But a suit, you just wear."

"The prototype itself is not currently suitable for operation in a close combat environment," SOCOM spokesman Navy Lt. Phillip Chitty told Task & Purpose, adding that JATF-TALOS has no plans for an external demonstration this year. "There is still no intent to field the TALOS Mk 5 combat suit prototype."

It's that suit-wide interconnectivity that Heinlein described that's the fundamental capability missing from the TALOS. SOCOM's Joint Acquisition Task Force - TALOS missed the the initial deadline for a working Mk 5 prototype due to "complex subsystem interdependencies," Chitty told Task & Purpose.

Although those individual subsystems — the exoskeleton, base layer, visual augmentation system, helmet assembly, armor, power and communications — continue to be "refined" in support of independent applications elsewhere, they won't come together to form a seamlessly high-tech prosthesis.

"It's not the Iron Man. I'll be the first person to tell you that," SOCOM acquisition officer James Smith told attendees at an NDIA SO/LIC forum in early February, Defense One first reported, adding that TALOS was "not ready for primetime in a close-combat environment."

Chitty confirmed that SOCOM was, as Defense One characterized it, "chopping up its Iron Man Suit for parts."

"As the TALOS project draws to a close, the JATF is being refocused to iteratively prototype new technical solutions that enhance the SOF mission and support the Hyper-Enabled Operator concept," Chitty told Task & Purpose. "Progressions of select TALOS technologies will be further developed to support the JATF's new direction."

Those technologies are nothing to sneeze at. According to Chitty, the five-year slog towards an operator-ready combat suit ended up yielding a significant number of mature direct technology spin-outs, including new lightweight polyethylene armor, a "thermal management suit," an enhanced operational stress monitoring capability, and a small arms stabilization system."

"The full-body exoskeleton prototype to offload payload weight is currently not mature enough for SOF needs," Chitty said. "However, the knowledge gained informs the Services' interest in exoskeleton technology for mobility and logistic applications."

The five years and at least $80 million spent on the TALOS has yielded a tremendous volume of technical knowledge that may bolster other exoskeleton projects throughout the U.S. armed forces and defense industrial base, Chitty said, from the Army's "third arm" weapons harness to Lockheed Martin's ONYX exoskeleton.

But even the applications beyond JATF TALOS are limited due to its focus on a SOF mission set. While the lightweight armor and small arms systems may be useful for conventional close combat, JATF's main effort "is shifting to the cognitive domain and provisioning the warfighter with information dominance at the edge," Chitty said.

"Today's technology is capable of providing exceptional amounts of data and information that must be processed and delivered to the right person, at the right time, in a useful way, to be operationally relevant," he said. "We must develop the architectures necessary to sense, monitor, transport, process, and analyze data to aggregate the right information that will inform tactical decisions at the edge."

As SOCOM scales back its powered armor aspirations, other adversaries are expanding their horizons. In August 2018, the Russian Ministry of Defense flaunted its third-generation Ratnik-3 combat suit purportedly replete with a powered exoskeleton and active camouflage capabilities. The appearance of the Ratnik-3 smack in the middle of a critical year for the TALOS appeared to signal a what Defense One called a "military exoskeleton arms race."

When asked about where the Pentagon's powered exoskeleton capability stood compared to America's great power competitors, Chitty declined to comment.