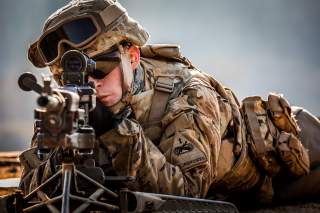 The Japanese used them on Iwo Jima to ambush American soldiers. So did the Viet Cong, forcing American “Tunnel Rats” to ferret them out. North Korea and Iran use them today to protect their nuclear weapons programs, while ISIS tunnels have been a deadly thorn in Afghanistan, Iraq and Syria. Even Israel has discovered Hezbollah and Hamas tunnels penetrating beneath its borders.

But in the spirit of “if you can’t beat ‘em, join ‘em,” the U.S. military wants to build its own tunnels on the battlefield.

It’s not that the United States lacks tunnel knowhow. American industry knows how to build tunnels for everything from highways to utilities. The Pentagon devotes considerable effort today to developing technology to detect and destroy tunnels.

But what is lacking is expertise in building battlefield tunnels. “No DoD Military Occupational Specialty (MOS) includes offensive tactical tunneling, nor does any technology or equipment support tactical tunnel creation or exploitation,” DARPA explains. “In addition, current tunneling operations primarily rely on exploratory bores and above ground guidance beacons, both closely-coupled with human operators to guide drilling/boring routes. Underminer will create aggressive tunneling approaches, downhole sensing, and operations concepts that surpass these limitations. A tactical tunnel network could provide secure logistics support infrastructure, enabling concepts of operations (CONOPS) such as pre-positioning supplies in advance of an operation or providing ongoing resupply as troops move through an area. The ability to rapidly bore tactical tunnels could be helpful in contingency operations such as rapid ammunition resupply, rescue missions, or other immediate needs.”

Tactical tunnels offer several advantages. They would allow U.S. troops to cut loose from forward operating bases and the vulnerable supply lines that sustain them. They also add another dimension—a subterranean one—to the battlefield that troops can exploit.

DARPA specifies various minimum thresholds: a tunnel length of 500 meters (547 yards), a bore diameter of 100 millimeters (4 inches), and a tunneling speed of 0.1 meters (0.11 yards) per second that DARPA says is twenty times faster than current standards. While this doesn’t sound like a recipe for the industrial-sized tunnel complexes of Iran and North Korea, it does seem closer to the sort of tunnels that the Viet Cong used to move unseen on the battlefield.

Interestingly, DARPA only describes tunnels as a means of resupply. There is no indication that American troops will crawl underground, even though that would be the logical next step. Yet DARPA does casually mention that tunnels could be used during rescue missions, which suggests that troops could escape through them in an emergency.

Also interesting is that DARPA wants tunneling technology that can avoid “artificially buried obstacles.” Presumably those artificial obstacles include whatever the enemy will stick into the ground to hamper American tunnellers, such as IEDs. Tunneling may be useful, but it’s still dangerous.

Which illustrates the disadvantage of tunnels: they are an expensive and awkward means of transportation. That the U.S. military feels a need to go subterranean is evidence that operating above-ground has become too dangerous.

Nonetheless, there is a poetic justice to Project Underminer: after decades of having tunnels used against them, U.S. troops will have a chance to use tunnels against the enemy.