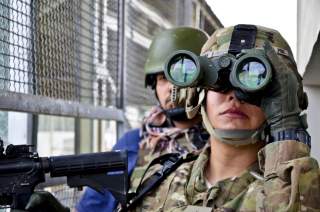 To deal with the ridiculous but deadly rise of DIY weapons and bombs in ISIS’s arsenal, U.S. special operators plan on fighting fire with fire — or, in this case, kamikaze drones with kamikaze drones.

In a Joint Urgent Operational Needs Statement submitted to the Department of Defense in 2016 (and first reported by Defense One this month), U.S. Special Operations Command put in a request for $24 million in funding for 325 Lethal Miniature Aerial Missile Systems (LMAMS), precision-guided munitions intended to loiter above a battlefield before dive-bombing their targets below.

According to Defense One, drone manufacturer AeroVironment has already delivered 350 Switchblade drones, a bazooka-launched “miniature flying lethal missile [that] can be operated manually or autonomously” for up to 15 minutes at speeds of nearly 100 mph, to SOCOM for battlefield deployments.

LMAMS aren’t totally new: The U.S. Army has been exploring the potential battlefield applications of drone-mounted bombs since 2012, when it solicited the weapons industry for a guided munition that would enable “unprecedented engagement of enemy combatants without exposing the warfighter to direct enemy fires.” Here’s how they function in a given operation area, per Defense Media Network’s excellent 2012 rundown:

Once positive identification of the target is obtained, the operator would perform mission preparation with the operator control unit, allowing autonomous flight to the area of interest. LMAMS would be capable of loitering once the fly out phase was accomplished. In the terminal engagement phase, LMAMS would have the ability to automatically track a target designated by the operator or allow the operator to manually control the system as needed to focus on a specific area or point of interest.

But while SOCOM made a similar request for 360 units through the DoD’s Rapid Acquisition Authority back in August 2013, the new reprogramming action and its $88.7 million price tag explicitly reflects “unforeseen military requirements  … determined to be necessary for the national interest” — namely, the continued development of increasingly dangerous weaponized UAVs by ISIS militants in Iraq and Syria.

While the terror group has reportedly not yet deployed so-called “suicide drones” against U.S.-led coalition forces downrange just yet, recent technological developments — from the handheld jamming devices like the DroneDefender electromagnetic rifle and the radar gun-esque “Dronebuster” to the vehicle-mounted Mobile High Energy Laser (MEHEL)anti-drone laser system — have focused on countering these swarms of aerial suicide bombers.

The Pentagon isn’t just countering the new threat, but learning from it, as well. ISIS’s deadly ingenuity, fostered by scarce resources and panicked desperation, may have inadvertently given DoD weapons planners a blueprint for the future of unmanned aerial bombardments. SOCOM’s Warrior program chief, Army Col. John Reim, put it nicely to Defense One: Sometimes, instead of schlepping a big ol’ MQ-9 Reaper, “you need to be able to throw it on a truck.”

SOCOM’s efforts likely won’t stop with its increasingly expensive orders of the handy tube-launched Switchblades: The command even plans on opening a drone hacker lab in Tampa (“at an unspecified point in the future,” per Engadget) to imagine more murderously efficient applications of drone tech, from the kamikaze drone to the terrifying automated drone swarm. The Pentagon can’t just counter new threats — it must become them.

“The threat is really changing — this explosion of commercial technology, of super-empowered commercial technology, of each individual technology path on an accelerated schedule,” SOCOM acquisition chief James Geurts toldthe assembled crowd at a National Defense Industry Association conferencein Tampa, Florida, on May 16. “When you start stacking accelerations on top of each other, pretty soon you’ve got autonomous swarms of drones with facial recognition attacking you on the battlefield. And so how do you get out in front of that?”

Given that SOCOM’s Switchblade request envisions deployments through fiscal year 2019, it’s likely that kamikaze drones may become a staple of Operation Inherent Resolve — though, not in the way that ISIS tinkerers probably hoped.