This is the U.S. Navy’s Edge: Unmanned Aerial Refueling at Sea 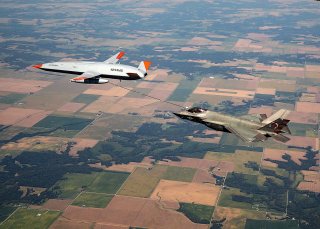 The U.S. Navy and Boeing are putting the MQ-25 Stingray through its paces. The military service and defense contractor simulated aircraft carrier deck handling at a Navy facility in Norfolk, Virginia, last week. The Stingray fired up its engine and taxied, run by controllers on the simulated deck during the testing.

“The Stingray is the future of naval aviation. It is the first aircraft carrier-based unmanned air vehicle (UAV),” explained Rear Adm. John Meier, Commander of Naval Air Force Atlantic, in a U.S. Navy statement. “The ground testing is another step toward the teaming of manned and unmanned aircraft platforms. Integrating platforms like the MQ-25 into the air wing will increase their lethality and reach.”

All Hands on Deck

The Stingray moved from simulated to actual carrier decks too. Just yesterday, the Navy’s Naval Air Systems Command posted a video of the Stingray aboard the USS George H. W. Bush during its carrier testing on social media. It referred to the platform as part of the air wing of the future.

The Boeing Stingray recently refueled an F-35C Lightning II, marking the first time the Navy version of the F-35 variant received fuel from an unmanned platform. The test was only the Stingray’s third in-flight refueling exercise. The Navy noted once the MQ-25 Stingray is fully operational, it will refuel every single “receiver-capable carrier-based aircraft” in the Navy.

The Stingray can deliver about 16,000 pounds of fuel at a distance of 500 miles from a carrier. To put that into perspective, the Navy’s F/A-18 Super Hornet can hump just under 10,900 pounds of fuel and have a range of about 450 miles.

Refueling the Super Hornet is particularly needed, as the Navy has decided to ditch its plan to equip its Super Hornets with conformal fuel tanks for reasons that remain somewhat unclear. One reason may be that the tanks exert excessive stress on the Super Hornet airframe or may impede maintenance.

The Stingray will soon be fully operational. And somewhat remarkably, the Navy believes that the MQ-25 Stingray will be their “fastest major defense acquisition programs to reach initial operational capability.” And while the Stingray is not yet quite ready to take off from American flattops, it is close—and the future of naval air wings.