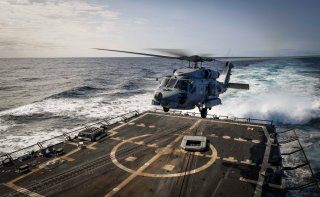 In a short question and answer session with reporters, Chief of Naval Operations Adm. Michael Gilday said that the Navy’s upcoming Arleigh Burke-class destroyers are some of the best in the world.

When asked if the Navy’s Flight III Arleigh Burke-class destroyers could pick up the slack created by the retirement of the Navy’s Ticonderoga-class cruisers, the Chief of Naval Operations was emphatic in his endorsement.

“Yeah, they can. And so we do that now with the Flight IIs, and we can certainly do it with the Flight IIIs,” Gilday said. “I think, importantly, with the Flight IIIs, we’re also leading the way in the transition with DDG(X) towards the end of this decade. And so, I expect Flight III DDGs, along with DDG(X), to be around for decades and decades. And, certainly, that air missile and defense commander role is going to be right—a core mission for them throughout that timeframe.”

While the Flight III Burkes are indeed capable, the Navy will need as many as possible. The Navy needs “as many as we can build, quite frankly,” Gilday said.

“We just see the demand for destroyers increasing,” he said. “I’ve said publicly that … we need a high number of small surface combatants as well as large surface combatants. There’s going to be a definite role for these Flight IIIs … in the future.”

In Gilday’s opinion, the ships are some of the best in the water today.

“Ingalls has been building these destroyers for decades, 40 years now this class of ship,” he said, while speaking at the christening of the USS Jack H. Lucas. “This is the 75th DDG hull that we’ve christened. And so they know what they’re doing.

“They’re like gold-medal Olympic athletes. And so this is a shipyard that really does set the pace. If the United States Navy is the pacing threat in the world with respect to navies, I consider this shipyard to be pacing many others with respect to the quality of the ships that they produce.”