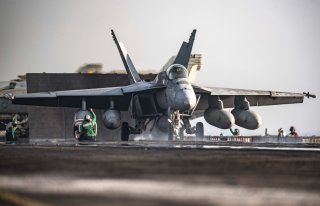 Policymakers are currently deciding the future of America’s aerial defense capabilities. As military leaders and members of Congress chart a path forward, they’re faced with challenging decisions about which capabilities to invest in considering the limited resources available to be allocated to air power. The U.S. Navy, in particular, is in need of capable, battle-ready aircraft. That’s why as our leaders weigh aircraft options that satisfy current and future needs, they must include the F/A-18 Block III Super Hornet.

The F/A-18 Block III Super Hornet is a highly capable fighter with several important upgrades that complement the Navy’s newer fighter, the F-35C, but without excessive production, procurement, and maintenance costs. It comes with increased computing power and communications systems that will allow it to speak with future manned and unmanned aircraft along with a digitized advanced cockpit system. The new Block III Super Hornet also comes with a passive detection and tracking system with the ability to track stealthy targets at longer distances and a service life that will be extended by 40 percent.

One of the major advantages that the F/A-18 provides to the Navy is its dual engines. It’s a safety feature that shouldn’t be overlooked. It’s not unheard of for an engine to be lost in combat. In 1991, a Marine F/A-18D successfully completed its mission and made an uneventful landing on a single engine after having to shut the second one down when it was hit by an Iraqi surface-to-air missile. The dual-engine capability is a lifesaver.

The uncertain landscape of future battlegrounds must be taken into account when investing in defense programs. Another practical one is diversity. No winning basketball team starts five shooting guards and no football team starts 11 quarterbacks. The reason is obvious. It takes different skills and different capabilities to win. The same is true for our defense strategy, making it necessary for naval and congressional leaders to invest in a diverse fleet of military aircraft.

Despite challenges, including historically inconsistent sustainment funding and a high “pace of operations” that have increased the wear and tear on the F/A-18, the Super Hornet has been the only naval aviation program to successfully meet the objective of 80 percent readiness. Quite an achievement in comparison to some of its peers.

When it comes to battle readiness, cost-effective procurement, and sustainability, there is no substitute for the F/A-18 Super Hornet. It is an essential aircraft for the Navy and a necessary component to our nation’s overall national security. Measured by how much it costs to operate, a new Block III Super Hornet is estimated at $19,000—far more affordable than other aircraft in the fleet, which is important considering the fleet continues to operate above expected levels.

Without the procurement of additional Super Hornets, the Navy risks having only one defense manufacturer with the ability to build fighters before the Next Generation Air Dominance (NGAD) platform is secured, which could take more than ten years. I don’t think I’m the only one who shudders at the thought considering the growing and increased capabilities of our near-peer adversaries.

A diverse, complementary fighter fleet is the key to air superiority. The F-35 plays an important role in this effort but naval and congressional leaders cannot rely on it alone. The F/A-18 Block III Super Hornet must be part of our current fleet, as well as the next generation of air defense in order to achieve mission readiness and national security.

John Zitnick served 4 years in the U.S. Air Force during Vietnam before beginning his nearly 35-year career on the F-18 program with McDonnell Douglas as a Flight Test Instrumentation engineer at Patuxent River Naval Air Station. He continued working on the program in St. Louis, MO before returning to Patuxent River in 1994 as the instrument department head. He was then assigned as Instrumentation Lead for the F-18E/F program weapon separation team.  Over the next 21 years, John worked on numerous testing programs for the E/F program, including the first F-18G sea trials on a U.S. Naval Carrier. John was also involved with Electromagnetic Aircraft Launch System qualification for the F-18G at Lakehurst Naval Air Station and integration of the new electronic jamming pod for the F-18G.