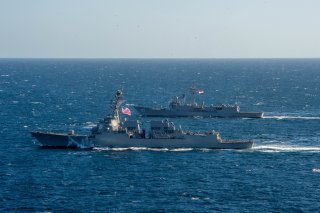 The 2022 International Maritime Exercise (IMX) began last week with a ceremony at the U.S. Navy’s Fifth Fleet headquarters in Bahrain. IMX, led by U.S. Naval Forces Central Command is the largest annual exercise in the Middle East. It features sixty partner nations and organizations in drills that last eighteen days.

IMX also includes combined training exercises with the Cutlass Express (CE), which is led annually by the U.S. Naval Forces Europe-Africa in the coastal regions of and the West Indian Ocean.

The combined training will feature 9,000 personnel and up to fifty vessels operating across the two regions.

In addition to the thousands of sailors and support personnel who are now taking part, ten of the partner nations have employed more than eighty unmanned systems to test. It is reported to be the largest group of unmanned platforms used in any naval exercise to date. The exercises will allow participating forces to test unmanned systems and artificial intelligence in different training scenarios. Lessons learned could ultimately be applied to future real-world operations. Training will focus on enhancing capabilities in command and control, sea control, maritime security operations, and mine countermeasures.

This is the seventh iteration of IMX since its establishment in 2012, and the first time that unmanned systems and AI will be employed. Training evolutions during this year's combined exercise will span across the Arabian Gulf, Arabian Sea, Gulf of Oman, Red Sea and North Indian Ocean.

"We are really excited about IMX because the size and scale of it will really allow us to get a lot of experience," Cmdr. Tom McAndrew, exercise planner for unmanned systems and AI integration, said in a roundtable with reporters, FedScoop reported.

Other organizations participating in IME/CE include Combined Maritime Forces, INTERPOL, NATO Allied Maritime Command, NATO Shipping Center, the Standing NATO Maritime Group, the UN Office on Drugs and Crime, and the U.S. Agency for International Development. Countries from Africa, Asia, Europe, North and South America have also deployed vessels. Notably, Israel and Saudi Arabia are each participating in the maritime exercise even as those two countries have not normalized diplomatic relations, despite some surrounding neighbors formally recognizing Israel under the Abraham Accords.