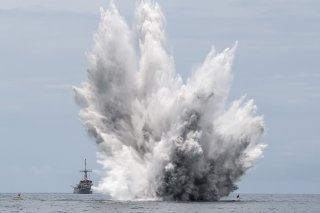 The U.S. Navy exploded a number of undersea explosives in the vicinity of its mine-hunting surface drones to assess the ability of the unmanned craft to withstand undersea attacks.

It’s an important test for the Navy’s fast-growing fleet of Unmanned Influence Sweep System (UISS) surface drones equipped with advanced mine-hunting technology. The ability to withstand attacks and sustain operational functionality is critical while searching for naval mines. A mine could detonate unexpectedly, or the drone could be targeted by enemy attack.

The Navy is working to ensure the forward-operating drones can withstand enemy attacks, turbulence, or rough seas caused by nearby explosions. A Navy press release on the test explains that the “UISS provides acoustic and magnetic minesweeping coupled with the unmanned, semi-autonomous, diesel-powered, aluminum-hulled mine countermeasures unmanned surface vehicle (MCM USV).”

The UISS can operate from a Littoral Combat Ship, shore facilities or other platforms to conduct forward surveillance and reconnaissance using surface and undersea sensors such as towed sonar. The UISS program has been in the works for several years and recently completed shipboard Initial Operational Test and Evaluation in preparation for service. The mine-hunting drones are an integral part of the Navy’s growing fleet of Unmanned Surface Vessels increasingly engineered with new levels of AI-enabled autonomy.

The UISS is part of a fleet of Mine Countermeasures (MCM) drones equipped with a range of mine hunting technologies, including Raytheon’s AQS-20C towed minehunting sonar, according to the press release.

One concept is to enable cross-domain connectivity so that one unmanned system can detect threats and relay information to other drones, surface ships, aerial systems, or undersea platforms. For example, UISS and MCM USVs are working on being networked with undersea mine-hunting drones such as the Barracuda unmanned system which lurks underwater to hunt for and destroy enemy mines. The Barracuda is engineered to operate semi-autonomously undersea, using guidance systems to find enemy mines and then dispatching explosives to destroy them without requiring human intervention.