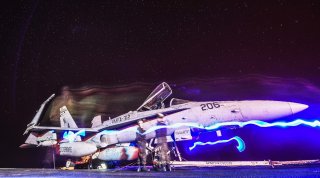 Acting Navy Secretary Thomas Modly doubled down on a leaked speech slamming Capt. Brett Crozier for his letter warning about a coronavirus outbreak on the USS Theodore Roosevelt.

Modly had relieved Crozier of his duties, criticizing the skipper for circumventing the chain of command after his dire warnings were leaked to the press. But the firing elicited a harsh public backlash, leading Modly to defend himself in a profanity-laced speech broadcast over the Theodore Roosevelt’s intercom system.

“I stand by every word I said, even, regrettably any profanity that may have been used for emphasis,” Modly said in a statement to multiple media outlets.

An audio recording of the speech obtained by Task and Purpose on Monday revealed a stark divide between the acting Navy Secretary and the crew of the Theodore Roosevelt. Sailors could be heard swearing and jeering as Modly said that Crozier was either “too naive, or too stupid to be a commanding officer of a ship like this” if he had not intentionally leaked his memo to the press in violation of military law.

“The American people believe in you and they think that of all the people in the world who can keep their s—t together in something like this, it’s the United States Navy and our sailors…That’s your duty, not to complain,” Modley added. “Everybody’s scared about this thing, and let me tell you something: if this ship were in combat, and there were hypersonic missiles coming at it, you would be pretty f—king scared, too.”

Video from onboard the Theodore Roosevelt showed sailors cheering as Crozier was led off the ship. The former skipper has since been diagnosed with the coronavirus.

Modly claimed that the leaks had made it more politically difficult for the government of Guam, where the Theodore Roosevelt is docked, to relocate sailors who had been evacuated from the ship.

He added that the “media has an agenda...and so they use it to divide us and use it to embarrass the Navy,” and that the decision to remove Crozier had attracted “hatred and pure evil.”

Presidential candidate and former vice president Joe Biden had called Modly’s decision “close to criminal” in a Sunday interview. Modly lashed out at the comment in his speech.

“It’s not about me. The former Vice President of the United States, Joe Biden, suggested just yesterday that my decision was criminal,” he said. “I assure you it was not, because I understand the facts, and those facts show that what your captain did was very, very wrong in a moment when we expected him to be a calming force in a very turbulent sea.”

Modley had earlier cited political concerns in an interview about the Crozier affair, telling the Washington Post that “didn’t want to get into a decision where the president would feel that he had to intervene because the Navy couldn’t be decisive.”