The U.S. Navy Could Change Dramatically Thanks to the Coronavirus 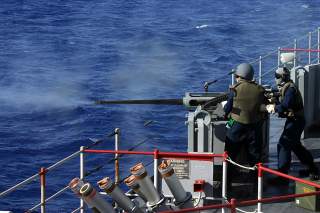 One year ago, the USS Fort McHenry was quarantined for two months after 25 sailors and marines were infected with viral mumps. Now, the U.S. Navy now has its first confirmed coronavirus case onboard the USS Boxer, a Wasp-class amphibious assault ship which, when staffed fully, carries more than 1,000 men and women.

It may be more difficult for pandemics to reach deployed ships, but it is not impossible. Even the Nimitz-class aircraft carriers powered by nuclear reactors often “resupply at sea” with helicopters transporting pallets of goods from ships departing nearby ports that meet them with food, equipment, and spare parts. Amphibious assault ships and their escorts carry hundreds of Marines who exercise ashore every few weeks in different training grounds. Both amphibious and carriers regularly dispatch aircraft to shore. For decades, carriers have regularly received and dispatched C-2 Greyhound ‘Carrier On-Board Delivery [COD]’ to a series of air bases across the globe; these are currently being replaced by the V-22 Osprey. COD crew often spend more time off the ships than they do on them. The point? Carriers are hardly as isolated while at sea as many believe. Certainly, they can isolate—needed parts can be cannibalized or manufactured onboard, and food can be stretched out with canned fruits and vegetables replacing fresh produce. With an illness such as the coronavirus, however, ships may not have the opportunity to cut themselves off from networks on land, especially if periods of contagiousness precede symptoms.

The devastating coronavirus spread on cruise ships highlights the problems of quarantine and isolation onboard ships. Navy ships are not so luxurious. While top officers might have single or two-man staterooms, on Wasp-class ships, staterooms shared by four to six officers is more the norm, Enlisted berthing can include several dozen bunks. Even in medical quarters, isolation can be a problem.

The current pandemic has led to speculation about supply chains. The coronavirus crisis has highlighted to American policymakers just how dependent the United States (and everyone else) are on China for basic medical equipment and drugs. Certainly, when the crisis passes, both Congressional Democrats and Republicans will be less sanguine about the decline of America’s own manufacturing base in key industries, and not just the medical sector.

At the same time, the coronavirus pandemic might focus attention on a seldom-discussed vulnerability for the U.S. Navy. When analysts focus on vulnerabilities, much of the discussion focuses on whether a new generation of Chinese and Russian hypersonic missiles could defeat U.S. aircraft carrier defenses.  The coronavirus, however, highlights a comparative disadvantage manned-platforms have, especially as robotics and automated platforms increase in both range and sophistication. It is not sufficient to dismiss coronavirus impact because naval personnel are young and fit. While coronavirus so far disproportionately impacts the elderly, previous pandemics such as the Spanish flu targeted the young and ravaged military barracks.

Unmanned or lightly-manned shipping is already under development. Autonomous tanker traffic is already on the horizon on the high seas. In 2016, the U.S. Navy launched the unmanned Sea Hunter anti-submarine warfare platform. DARPA is actively exploring underwater vehicle technology. Iran or its proxies have used unmanned suicide speed boats off the coast of Yemen. Just as coronavirus will cause a fundamental rethink about manufacturing supply chains, perhaps its reach onto the USS Boxer, its potential spread to other deployed ships, and its ability to impact readiness of ships in port, will catalyze the Pentagon and their Congressional overseers to consider whether the Navy of today is the best force looking forward. Often, strategic inflection points emerge when confronted by the unexpected.