The U.S. Navy Could Soon Embrace What Amounts to Laser 'Shields' 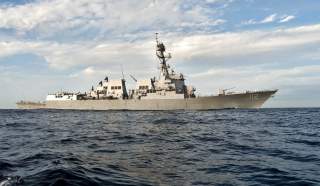 The U.S. Navy may soon be arming their workhorse destroyer fleet with a laser defense system as early as 2021.

The Arleigh Burke-class destroyers have been selected as the platform for the High Energy Laser and Integrated Optical-dazzler with Surveillance systems, according to a new report.

The laser would replace an existing defensive measure, known as the Rolling Airframe Missile system, designed to intercept and destroy missiles before they can take out a vessel.

According to The Verge, HELIOS is designed to protect against a variety of threats, such as small boats, drones, and missiles at close range, and is designed to work using the ship’s powerplant.

HELIOS will also connect to the existing Aegis Combat System, an automated system that uses a ship’s onboard radar to guide weapons to their targets.