The U.S. Navy Is Going All In on Laser Weapons 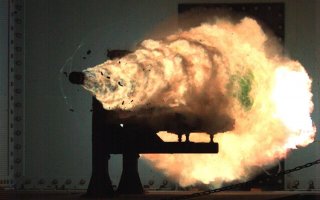 Two of Germany’s defense industry heavyweights, MBDA Deutschland and Rheinmetall have been awarded a federal contract to built and develop a laser weapon demonstrator that will be tested at sea.

The project’s timeline is ambitious, with fabrication, assembly, and installation to be completed by the end of this year, with testing in “near-operational conditions,” and the first for a German Naval Frigate. In keeping with German timidity and reluctance towards all things defense-related, MBDA’s press release stressed the defensive nature of the weapon and laser’s minimal collateral damage potential.

It’s not the first European laser project, however.

MBDA, an international joint venture between Airbus, BAE Systems, and Leonardo, also unveiled their Dragonfire laser turret demonstrator built for the United Kingdom’s Ministry of Defense in 2017. In addition, the company also opened a laser testing facility in 2019.

Lasers have the potential to revolutionize warfare, especially from a defensive standpoint. One of the clear benefits is economical: rather than expending missiles that cost anywhere from tens of thousands to millions of dollars to manufacture, a laser depends only on electrical output, which can be generated for less than $1 per shot.

There is also a capacity benefit: lasers turrets could in theory fire an infinite number of beams and wouldn’t be constrained by onboard storage space as is the case for missiles and other munitions. And traveling at the speed of light would naturally give laser-equipped platforms the fastest reaction time possible.

One of the factors constraining lasers is weather conditions. Moisture, dust, and rain can degrade laser beam power and limit their effectiveness. Even the air a laser beam travels through can absorb some of the laser’s energy and degrade beam strength, a phenomenon known as thermal blooming.

It’s not just the Germans who want to equip their warships ships with the next generation of weapons. The United States’ laser programs are also going at a fast clip and could see Arleigh Burke-class naval destroyers soon equipped with powerful new lasers.

The American laser program has progressed steadily, a development strategy that saw lasers of increasingly high power output tested at sea rather than waiting to field a fully mature design. Today, Lockheed Martin’s HELIOS, or High Energy Laser with Integrated Optical-dazzler and Surveillance weapon, is the company’s most powerful weapon by energy output — and they’re getting more and more powerful.

“As fiber laser power levels increase, our systems will be able to disable larger threats and do so across greater distances,” Lockheed stated. “When operated in conjunction with kinetic energy systems, these systems can serve as a force multiplier.”

The HELIOS project builds upon research the Navy did in 2014, in which their Naval Weapon System demonstrator laser fried a number of targets while at sea, a video of which can be seen below.

As time goes on, more and more nations are looking at laser weapons as a viable weapon of war, with China and Russia also working on such systems.