The U.S. Navy Has One Enemy It Might Never Beat in Any 'War' 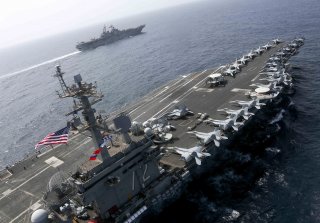 The U.S. Navy has been spending billions of dollars a year in recent years to deal with an unlikely problem: Rust. After all, its ships are made mostly of steel, and those ships operate on water.

According to a Breaking Defense report last August, the Navy had begun using Google Cloud, in order to use AI technology to find rust on its equipment.

“The AI technology behind this enabled the US Navy to quickly and seamlessly examine tens of thousands of images to prioritize the needs to be repaired immediately and or later on,” Mike Daniels, vice president of Global Public Sector, Google Cloud, told the site.

Google did not reveal the dollar value of its contract with the Navy. The work is being done along with Simple Technology Solutions (STS.)

“The tools we’re providing can not only save the Navy billions each year, but significantly improve readiness and speed deployment,” Google’s Daniels told Breaking Defense. “And this is a physical job right now. We’re improving results for the inspectors.”

Popular Mechanics had written in early 2020 about the Navy’s rust problem, and what they were doing about it. That publication cited a Los Angeles Times figure that rust cost the Navy $3 billion a year — or over $10 million per ship — as of 2014. But it isn’t just the ships; rust is also a problem on helicopters and other naval properties.

Some of the ships are visibly rusted, leading to occasional criticism in the media about their appearance. The Navy has been scraping off and painting over the rust, and paint can be expensive, especially when it comes to covering large vessels.

“The war against rust is one war the Navy will never win—that is unless it builds ships out of something other than steel,” the Popular Mechanics story concluded.

More recently, Task and Purpose looked at the rust problem, noting that when the USS Stout came from a more than 200-day deployment last fall, its rust was obvious.

“We have become the worst-looking Navy in the world—with no competition,” naval journalist and commentator Chris Cavas told the site. And the problem has only gotten worse during the coronavirus pandemic, with fewer visits to port taking place.

Part of the problem is lengthy deployments, longer than those of most of the Navy’s size.

“These long deployments and 208-day underways are going to take a toll on these ships inside and out,” reporter David Larter told The War Zone, per Task and Purpose. “It’s honestly impressive they kept a quarter-century old ship in running form that long! But the Navy will have to pay the piper. This is unsustainable.”