The U.S. Navy Has Plans to Build Lots of Deadly New Submarines 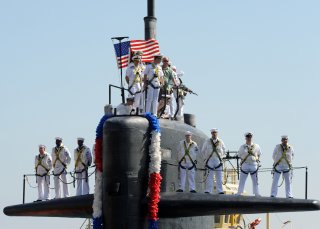 The U.S. Navy is getting close to inking a deal for a new type of attack submarine. The new “Block V” variant of the Virginia-class submarine adds, via a lengthy “payload module,” 28 vertical missile tubes to the 12 tubes on earlier versions of the Virginia.

The extra missile tubes should help alleviate, but not eliminate, a looming shortfall in missile capacity that could result from the planned retirement, in the mid-2020s, of the Navy’s four guided-missile submarines.

The Navy and submarine-builder General Dynamics Electric Boat had expected to sign the more-than-$20-billion deal for 10 Block-V subs, nine of which will have the extra missile tubes, back in April 2019.

But negotiations have dragged into late summer 2019. Now the Navy risks jamming up Electric Boat with two many orders. The Block-V submarines likely will be under construction at the same time that the Electric Boat and supporting yard Newport News also are beginning to build new Columbia-class ballistic-missile subs.

“Virginia-class submarines are built in sections, which are assembled at Electric Boat in Connecticut and by Newport News Shipbuilding in Virginia,” Ben Werner reported for the news website of the U.S. Naval Institute.

The yards share final assembly responsibilities, shipping modules back and forth on barges. Production of new submarines has slowed recently because the yards have had trouble getting the parts needed to finish modules, which then holds up final assembly. Any such delays will become magnified in two years, when the yards start building both the Columbia-class submarines and Block-V Virginia-class sub at the same time.

A successful start of Columbia-class manufacturing is linked to the current Block V Virginia-class negotiations, [Assistant Secretary of the Navy James] Geurts said. Ideally, the Block V production will be stable by the time the first Columbia-class sub is built.

“It is something I’m really focused on, getting the Block-V contract settled in, getting stability in Virginia, getting that to continue to deliver on cadence. That will be one of the biggest enablers for Columbia,” Geurts said. “So a lot of focus on submarines right now; getting Virginia positioned the right way so that we can build from that for Columbia.”

While preparing to launch production of Block-V Virginias and Columbias, the Navy also is beginning to design two totally new classes of submarine.

The balance of today's submarines include 35 1980s-vintage Los Angeles-class attack submarines, three attack boats of the 1990s Seawolf class, 13 newer Virginia-class attack boats and four old Ohios that the Navy converted into cruise-missile carriers during the early 2000s. Each of these old boats can carry as many as 154 Tomahawk cruise missiles.

Today around 10 attack subs are on patrol on any given day while the others undergo maintenance and crew training. Navy plans require as many as 35 boats to surge on short notice to a war zone during a major conflict.

As of 2017, the Navy planned to upgrade the Virginia design and continue buying vessels of that class though the late 2040s, at least, while also retiring the converted Ohio guided-missile submarines without a direct replacement starting in the mid-2020s.

But the latest edition of the Navy's 30-year shipbuilding plan revises those plans. Instead of upgrading the Virginia, the sailing branch anticipates designing a brand-new attack boat it calls the SSN(X). The new vessel would enter service beginning in 2034.

But the SSN(X) would not include the Block-V Virginia’s payload module, instead devoting its extra space to torpedoes, propulsion and quieting features -- design aspects that contribute to superior performance in sub-on-sub warfare.

Reducing missile armament in favor of torpedoes in the SSN(X) design could, absent other force-structure changes, exacerbate the loss of around 600 missile tubes when the converted Ohios decommission and Block-V Virginias with their extra 28 missile tubes apiece are just beginning to enter service in the mid-2020s.

The new Large Payload Submarine, which the Navy first mentioned in its shipbuilding plan for 2019, addresses this problem. "The Navy provides little information about the size and capabilities of the large payload submarine," CBO explained.

The CBO "assumed that it would be based on the Columbia-class hull with its missile tube section reconfigured to perform whatever missions the Navy might want and that other sections of the ship would receive the necessary equipment and modifications to support the payloads the submarine might carry."