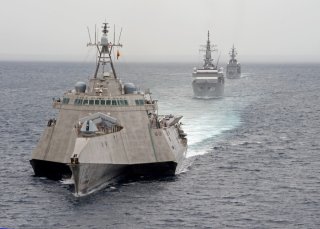 The U.S. Navy is refining a series of additional “non-kinetic” ship defenses, including systems involving electronic warfare (EW), cyber, or high-powered microwave weapons. These weapons, in a manner similar to kinetic solutions, can be vastly improved through the use of multi-domain networking.

Ship defenses, while increasingly layered, robust, and networked, are now quickly being reinforced by a growing range of non-kinetic assets of equal or even greater defensive value. For example, electronic warfare technologies such as the Navy’s upgraded Surface Electronic Warfare Improvement Program (SEWIP) Block III technology can sense and “jam” the electronic guidance systems of incoming precision weapons to throw them off course or disable them. Northrop Grumman’s Block III SEWIP, for example, merges information operations with EW applications to identify and deconflict relevant areas of the information spectrum and synthesize threat data to attack or disable enemy threats.

The Navy’s sophisticated ship defenses are evolving at an alarming pace as well, a phenomenon which bears prominently on the service’s coming competition with China. Ship-based defenses are of particular relevance to competition in the Pacific as there are fewer land locations from which to operate or fire interceptors. For this reason, the Navy has emphasized networking its ship defenses, since offering additional multi-domain connectivity allows its fleet a greater ability to see, track, and destroy approaching enemy attacks.

For instance, the Navy’s now-deployed Naval Integrated Fire Control-Counter Air (NIFC-CA) program was a breakthrough innovation some years ago. NIFC-CA now arms Navy destroyers with an expanded capacity to see and destroy incoming enemy weapons, including anti-ship cruise missiles from beyond the horizon. The concept works off of networking, as NIFC-CA connects ship-based radar and communication systems with an “aerial sensor” node that is strategically positioned to sense “beyond the horizon.” The aerial “node” platform began as an E2D Advanced Hawkeye but has since been proven alongside an F-35 Joint Strike Fighter. It may incorporate additional systems, such as drones, in the future. The aerial node, detecting approaching threats, sends data to ship-based command and control in position to launch an anti-air Standard Missile 6 (SM-6) interceptor to destroy the threat at much greater standoff distances. This means ship commanders have much more time with which to decide how to counterattack or choose the optimal ship defense system.

NIFC-CA has been deployed on ships since as far back as 2015, and likely continues to be refined. The ability to hit incoming maneuvering threats is a key element of this, given that the SM-6 operates with a “dual mode” seeker capable of sending a forward radar “ping” from the ship itself, without needing to rely on a ship-based illuminator. This enables the SM-6 to maneuver in flight to adjust to moving targets and greatly increase the operational envelope for ship defenses.