The U.S. Navy Loves Its Aircraft Carriers, But Are They Becoming Obsolete? 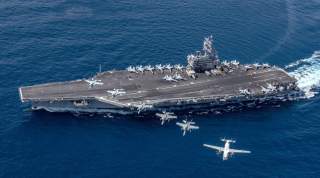 Key point: The carrier—like the dreadnought-type battleship—is a massive investment of national treasure and concentrates a huge amount of combat power and national prestige onto a single platform.

The United States Navy has the world’s largest aircraft carrier fleet with 10 Nimitz-class vessels and one Gerald R. Ford-class ship in service. Meanwhile, China has two carriers and is very likely to build more. The United Kingdom and India are also building aircraft carriers and Russia and France each have one such vessel. For navies around the world, the carrier is a symbol of prestige and power—much like the battleship before it. But are aircraft carrier still an effective tool of war or are they simply expensive white elephants?

Many have predicted the demise of the aircraft carrier since the end of the Second World War. The ships are large and extremely expensive and vulnerable to all manner of threats so the argument goes. Those threats, since 1947, have included everything from wake homing torpedoes and cruise missiles to tactical nuclear missiles. Thus far, the carrier has remained the queen of the seas, but the mighty vessels have not faced off in a high-end conflict since end of the Second World War.

Could it be that the carrier is obsolete in the era of long-range precision-guided weapons? Perhaps, we simply have no way to know. It was not until Japanese bombers sank the British Royal Navy battleship HMS Prince of Wales and battlecruiser HMS Repulse on December 10, 1941, of the coast of Malaya that the world’s great naval powers realized the dreadnought era was over. The carrier has never faced such a moment—yet.

Many naval analysts suspected that the carriers’ days were numbered during that latter half of the Cold War as the Soviet Union developed advanced long-range anti-ship cruise missiles—along with bombers, surface ships and submarines to carry them—to target the mighty vessels. However, neither the Soviet doctrine nor the Navy’s Outer Air Battle strategy to defeat such an attack were ever put to the test. The Grumman F-14 Tomcat, Aegis cruisers and other elements of the carrier battle group never faced off against Soviet Tupolev Tu-22M Backfires, Oscar-class nuclear powered guided missile submarines or Slava and Kirov class cruisers and their arsenal of missiles.

In the quarter of a century since the end of the Cold War, the threat to the carrier was dormant and American power strode across the globe unchecked. However, China—smarting from the 1996 Taiwan Strait Crisis where the carrier USS Nimitz and her battle group and the Belleau Wood sailed between the mainland and Taiwan—vowed that it would not allow itself to be humiliated again and started developing countermeasures. Those countermeasures are a new generation of anti-ship cruise and ballistic missiles, which could theoretically cripple or sink an aircraft carrier from over 1200 nautical miles away.

China—together with a resurgent Russia—have poured billions into build a force that could in theory keep the U.S. Navy and its carriers at bay. The idea is that the United States would not risk a $13 billion carrier to intervene in a foreign conflict because the loss of—or even damage—to such a vessel would be tantamount to a national disaster. The U.S. Navy insists that its carriers can fight inside the engagement envelop of anti-ship ballistic missiles such as the Chinese DF-21D, but the service might not be taking into account the political cost to Washington if one its Nimitz-class flattops was damaged or destroyed. Such an event would be severe blow to national prestige and American credibility.

But there is precedence for China’s assumptions. As early as 1905, British naval theorists were positing that the loss of even a single battleship would be tantamount to a national disaster because so much combat power and resources were invested in a single vessel. Of course, as time when on, those predictions proved to be true after the Battle of the Jutland, where despite a minor tactical victory, the Imperial German High Seas fleet never against directly challenged the power of the Royal Navy because Berlin did not want to risk its expensive dreadnoughts. Instead the Germans focused on submarine and mine warfare—and the battleship largely became irrelevant.

The carrier—like the dreadnought-type battleship—is a massive investment of national treasure and concentrates a huge amount of combat power and national prestige onto a single platform. With the advent of long-range precision-guided weapons, the carrier—like the battleship before it when it was confronted by airpower—might be too vulnerable to survive. And if such a vessel is too vulnerable to serve on the front line, why pay $13 billion per ship? However, until there is another great power conflict on the high seas, the fate of the carrier will not be clear. It is possible that the carrier proves its worth, but it could also prove to be an expensive white elephant.