The U.S. Navy Needs 20 Years to Fix Its Shipyards 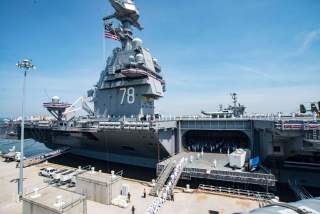 Maintenance for U.S. Navy ships is so backlogged that the problem will take decades to fix.

“The Navy has several efforts underway to improve its maintenance operations, but they will take years to implement, and will require sustained management attention and funding above current levels,” according to a Government Accountability Office report. “For example, the Navy estimates it will take 20 years to improve the infrastructure at its shipyards, 4 years to restore ship crew levels, and several years to improve maintenance planning. Until the Navy addresses these challenges, it will be hindered in its ability to rebuild readiness and prepare for the future, particularly as it grows the size of the fleet.”

A 2018 GAO report found that shipyard maintenance problems were so severe that the Navy “has been unable to begin or complete the vast majority of its attack submarine maintenance periods on time resulting in significant maintenance delays and operating and support cost expenditures.” The problem is that demand for depot-level maintenance far exceeds capacity at the four public shipyards at Norfolk, Pearl Harbor, Portsmouth and Puget Sound, as well as occasional maintenance performed at the private shipyards of General Dynamics Electric Boat and Huntington Ingalls Industries - Newport News Shipbuilding.

Auditors found “multiple factors that contribute to maintenance delays, including insufficient shipyard capacity, shortage of skilled personnel, and deferred maintenance during operational deployments, among others,” the GAO said in 2018. “Ships awaiting or delayed in maintenance incur operating and support costs. For example, GAO estimated that the Navy spent more than $1.5 billion in support costs from fiscal years 2008 through 2018 due to delayed maintenance for attack submarines.”

The U.S. military as a whole has been worn down by years of overseas conflict. But the Navy is facing multiple dilemmas: growing Chinese military power, a plan to swell the size of the battlefleet from 290 ships to 355 by 2030, and growing operational commitments that mean ships spend more time at sea. In addition, the Navy has been cutting crew sizes on its ships: fewer sailors on a ship means less chance for the crew to perform minor maintenance, which leads to even more repair work being tasked to already-overloaded shipyards.

The result is a vicious cycle. “Decisions to increase deployment lengths to meet the Navy’s operational demands can result in declining ship conditions and material readiness,” the GAO warns. “The declining condition of the ships can increase the time that ships spend undergoing maintenance at the shipyards. Increased maintenance time at shipyards can lead to decisions to make further operational schedule changes to extend deployment lengths for other ships to compensate for ships experiencing maintenance delays.”

To fix these issues, the Navy has put together the Shipyard Infrastructure Optimization Plan. It is also beefing up the size of its crews, such as adding thirty-two more sailors to the DDG-51-class destroyers.

The problem is that all of this will take time. It will take four years to add additional sailors, and twenty years to bring shipyards up to capacity. And the Navy may be underestimating the cost of fixing its shipyards. “The Navy estimated in 2018 that this effort will require $21 billion over 20 years to implement,” said the GAO. “However, this $21 billion estimate does not include inflation and other significant costs, such as those for utilities, roads, or environmental remediation....However, even that $21 billion estimate would require funding levels beyond what the Navy has requested for shipyard infrastructure in recent years.”