The U.S. Navy Needs to Kill the 'Weapons That Wait' (That Means Mines) 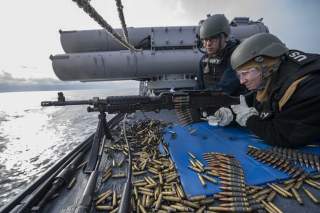 The Point: Mines have been a terror weapon on the high-seas for a long time. Can the Navy mitigate this threat with new technology?

They lurk beneath the surface of the ocean with explosive power, often buried in the sea floor, denying enemies entry into combat-critical waterways. They can explode on impact or use sensor technologies for proximity detonation… they are shallow, and deep-water, open ocean weapons that are inexpensive, available and increasingly deployed in critical waters by both rogue nations or great powers.

With this in mind, the U.S. Navy continues to fast-track a “take the man out of the minefield strategy,” and develop emerging technologies able to find, track and destroy mines -- all without putting sailors in danger. To execute this concept of operation, the Navy is moving quickly on what developers call “single path detection,” according to Capt. Danielle George, Mine Warfare Program Manager.

“It is when you take a single platform and go on a single outing and detect a mine and neutralize a mine all in one shot,” George explained, speaking at the Surface Navy Association Annual Symposium Jan 16, Arlington.

Typically, a mine detection sonar or maritime sensor is tasked purely with detection, a process intended to clear the path for a separate system or platform to actually “destroy” the mine. Now, emerging algorithms and networking technologies are able to achieve a substantial measure of autonomy,integrating detection and neutralization into a single system.

For the demonstration, the Navy used an emerging, layered system consisting of a forward looking AQS 20C sonar system, networking buoy and an undersea sensor-explosive known as Barracuda. The integrated system, as described by Raytheon developers, combines sonar, an RF antenna, an acoustic modem, an Electro-Optical/Infrared camera and a highly specialized explosive. The multi-pronged process, according to Andy Wilde, Raytheon Director of Strategy and Business Development for Undersea Capabilities, hinges upon a recently integrated high-tech forward-looking sonar known as AQS 20. Having recently delivered its 10th AQS 20 sonar to the Navy, Raytheon developers are moving quickly to meet a growing Navy demand for its long-range sensing technology.

The detection-neutralization “single-path’ process, Wilde told Warrior, begins with integrating the AQS 20 onto a Navy Common Unmanned Surface Vehicle before it is lowered into the water.

“The AQS 20C detects the mine and provides the position to the Barracuda’s acoustic sensor,” Wilde said.

The AQS 20 is networked to the Barracuda through an acoustic modem; the Barracuda then pursues the mine using sonar and its underwater EO/IR sensors. Once it receives its input from the AQS 20, the Barracuda “acoustically acquires the target and gets close enough to provide an EO/IR image back to the boat,” Wilde said. “Once the Barracuda gets to within two-to-three feet of the mine, it stops and hovers.”

“We need to have an operator validate the target. The EO/IR visual sensors senses the mine and captures the image. It sends the video image back to the operator to detonate,” Wilde explained.

Significantly, perhaps of greatest significance, the Barracuda not only uses cameras to “see” and “confirm” the existence of a mine, but also itself functions as its own explosive able to destroy or neutralize the mine. The explosive, Wilde described, is highly specialized for the mission, saying additional detail was not available for security reasons.

Both George and Wilde explained that while the technology now exists for the AQS-Barracuda connection to operate with complete autonomy, current doctrine requires that there always be a “human in the loop” to make the decision about whether to explode a mine-target.

The Navy-Raytheon Barracuda is now in a prototype stage as developers refine the final engineering details; the system has completed a preliminary design review and is awaiting completion of a critical design review.

“The Common Unmanned Surface Vehicle was in testing, so we used an unmanned surrogate platform for the demo. We towed the sonar and had an algorithm do automatic target recognition, send a snapshot to the operator, asking ‘do you want me to blow this up?’” George said.

As opposed to a standard propeller, the Barracuda uses what Wilde explained as orthogonal thrusters to navigate the drone through the water column. There are three main areas of searching or sensing, Wilde explained. A Synthetic Aperture Sonar sends acoustic pings off the ocean floor before analyzing the return signal to developing an image or rendering of the undersea terrain below. A “volume” sonar explores side areas of the surrounding water column and of course the AQS 20 scans forward to find mines not yet visible to other sensors. The AQS 20 is unique in that it is a long-range “forward” technology, as opposed to many existing systems which first need to travel beyond a mine target before confirming detection.

Interestingly, by having a close-in EO/IR sensor camera confirm that a threat object is a mine, the Barracuda seems to address a mine-detection problem explained in a 2011 Essay from the International Journal of Soft Computing and Engineering called “A Study on Detection and Classification of Underwater Mines Using Neural Networks.”

While discussing a handful of technical challenges at times confronted over the years with sonar detection, the paper explains that newer technologies such as advanced signal processing techniques, can ameliorate the problem of false positives. In essence, the paper seems to anticipate or foreshadow the value of a technology such as Barracuda's advanced sensors and the new high-fidelity AQS 20 sonar.

…..Mine detection problem is to simply assign a threshold to the mapped features, based on the premise that the object should be brighter (i.e., have a stronger reflected signal) than the background of a sonar image. This approach works well for a relatively featureless background, however a textured background may encounter many false positive mine locations. Recent mine detection methods have made use of advanced signal processing techniques….. The essay states (S. N. Geethalakshmi, P. Subashini, S. Ramya)

George said the ultimate plan is to deploy the Barracuda as part of the Littoral Combat Ship’s Mine Countermeasures package.

“It (the Barracuda) is small. It can be used autonomously, but that is not what we plan to do. The current plan is to have an operator in the loop. If there is one small neutralizer that can be used on a variety of platforms. I think it could be a game changer,” George said.

Newer, safer and longer-range countermine systems are in great demand by Navy weapons developers, as they are increasingly being used in large number weapons as deep water weapons. In fact, in recent years the Navy has created a special training and mine-warfare preparation unit called the Naval Surface and Mine Warfighting Development Center.

The abundance and sheer variety of mine threats can make detection more challenging. Some so called “bottom mines” can be buried or shallow-water mines easily triggered by surface ships or submarines. Moored mines, however, often tethered to the ocean floor, can be found in deeper parts of the water column. They can linger below the surface or possibly operate at much greater depths to target deeper draft ships, according to a 2014 NATO essay called “Naval Mines and Countermeasures.”

The significance of the mine threat, which continues to expand globally to include both deep water and littoral areas, is well articulated in a 2011 Naval War College Review article called “Taking Mines Seriously - Mine Warfare in China’s Near Seas.” Author Scott Truver says “mines are ‘weapons that wait.’ They are the quintessential naval asymmetric threat. Since the end of WWII, mines have seriously damaged or sunk almost four times more Navy ships than all other means of attack combined.

“We used to have mine-sweeper boats with a crew of 80 sending divers into the water. We do not have the luxury of spending months clearing mines,” Wilde said.