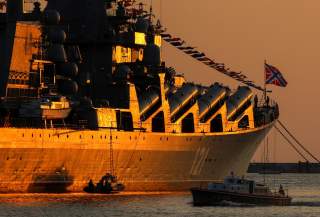 Here’s a scenario the U.S. Navy would rather not contemplate: every Russian surface warship armed with hypersonic anti-ship missiles.

But two interesting things have happened over the last few months. First, in January 2020, Russia conducted its first launch of a Zircon missile from a surface ship. The Admiral Gorshkov, the first of the new Project 22350-class frigates, fired the missile from the Barents Sea against a ground target, according to a TASS report.

"In accordance with the program of the Zircon’s state trials, the Admiral Gorshkov test-launched this missile from the Barents Sea against a ground target at one of military testing ranges of the Northern Urals in early January," an unnamed defense source told TASS. The missile reportedly flew more than 500 kilometers (311 miles).

The next step is to launch Zircons from nuclear submarines, TASS said.

But a month before the Zircon test, in December 2019, the head of Russia’s top shipbuilder claimed that all new Russian warships will be capable of firing hypersonic missiles (missiles that travel faster than Mach 5).

Alexei Rakhmanov, president of state-owned United Shipbuilding Corporation, was asked whether all Russian warships could be rearmed with Zircon hypersonic anti-ship missiles and Kalibr cruise missiles. “All the new projects of ships we are building are universal for a whole family of missiles from the standpoint of launchers, including those which you mentioned,’" Rakhmanov replied, according to Russian news agency TASS.

Rakhmanov added that rearming existing ships with new missiles would not be a "a too costly issue."

The Zircon missile has become a bogeyman, both threat and fable. It reportedly has a range of 1,000 kilometers (621 miles) and a speed of Mach 8 to Mach 9 (6,090 to 6,851 miles per hour), much faster than subsonic anti-ship missiles like the U.S. Harpoon (around 600 miles per hour) or supersonic weapons like Russia’s P-800 Onyx (Mach 2.5, or 1,900 miles per hour). The threat is serious enough that Britain worries that the anti-missile defenses on its new Queen Elizabeth-class aircraft carriers can’t stop Russian hypersonic anti-ship weapons.

Russia and the Soviet Union never really tried to compete with the U.S. in terms of big ships like aircraft carriers (Russia has just one carrier). But the Russian Navy today has about 30 destroyers and frigates, 50 corvettes and 30 small missile boats armed with supersonic or subsonic anti-ship missiles, or anti-aircraft missiles. Arming these ships with hypersonic weapons like the Zircon could theoretically allow a 500-ton Tarantul-class missile boat to sink a big U.S. cruiser or even a carrier.

Or that’s what Russian president Vladimir Putin wants the world to think when he describes the land-based version of the Zircon as “unstoppable.” Yet Russian navy chief Nikolai Yevmenov admitted in January 2020 that the Zircon suffers from “childhood diseases” that afflict new weapons. These problems will take several years to fix, Yevmenov added.

But there’s a bigger problem with the Russian Navy: even the fastest, longest-range missile is ineffective if it can’t find the target. A 500-ton missile boat attempting to sink a cruiser or carrier will be blown out of the water before it can fire a shot – unless it has needs long-range sensors that can detect the target before the target detects it. Or, it needs to be fed sensor data from another ship or aircraft.

That’s the sort of networked command and targeting in which the U.S. excels. As the U.S. military develops its own hypersonic missiles, the life expectancy of Russian warships will be that much smaller.

Operating in confined waters near the Russian coast, with plentiful support from land-based aircraft and radars, Zircon-armed Russian ships would be formidable. But Russian missile boats in the vast North Atlantic would be a different matter,

The Zircon and its ilk are deadly (or probably deadly, because they have yet to be tested in combat). But wonder weapons they are not.