The U.S. Navy Only Ranks Third In Total "Battle Force" Ships (China Has 624) 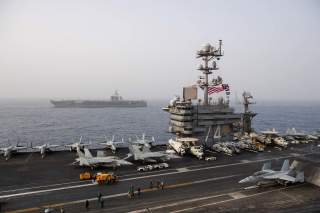 In terms of numbers of warships, the U.S. fleet actually places third. In 2019 the Chinese fleet possesses 624 warships, according to U.S. Navy commander Keith Patton, writing for the Center for International Maritime Security. The Russian fleet has 360 ships. The American fleet has just 333 “battle force” ships.

Officially, the U.S. Navy operates just 289 ships. Patton bases his own, bigger tally on the figures in the 2019 edition of Jane’s Fighting Ships, which includes some patrol boats and auxiliary vessels that the Navy leaves out.

But counting hulls can be misleading, Patton writes. For one, American ships on average are much bigger than Chinese and Russian ships are. “When tonnage is used as the metric, the picture changes dramatically.” The U.S. fleet in total displaces 4.6 million tons of water. The Chinese fleet displaces 1.8 million tons. The Russian fleet displaces just 1.2 million tons.

“However, does the metric of tonnage truly measure the power of a fleet?” Patton asks. American ships are bigger because they must deploy long distances in order to exercise Washington’s foreign policy. Russian and Chinese ships can afford to be smaller, as they deploy only short distances to the near waters where Moscow and Beijing focus their own foreign policies.

A big ship can be lightly armed. A small ship can be heavily armed. “Very similar if not identical anti-ship missiles are carried by small patrol combatants and mounted on the largest combatants, sometimes in identical quantities (eight being a popular number),” Patton explains.

“While the defensive and damage control capabilities of larger vessels may be greater, it still seems likely that a few missile hits will knock most ships out of action, if not sink them. If missiles are the true measure of a fleet’s combat power, then neither tonnage nor hull count is an appropriate metric, because neither is directly related to a ship’s missile capabilities.”

“This accounting of fleet firepower shows the USN has more than twice the BFM of the Chinese [People’s Liberation Army Navy]. The gap is even larger if the contribution of carrierborne aircraft is considered. The U.S. has an almost twentyfold advantage in fixed-wing aircraft operating from ships.”

Counting munitions also reveals the true relative power of America’s submarine fleet. While the U.S. Navy operates 53 attack submarines compared to Russia’s 54 and China’s 63, the American boats are more heavily-armed with 2,300 torpedoes and missiles, compared to 1,700 and 1,100 munitions, respectively, aboard the Russian and Chinese boats.

“Of course, any single metric will fail to capture the power of a fleet,” Patton writes. “Informed opinions will differ on the correct offensive and defensive load mix for a warship, or the qualities of a [U.S.] Harpoon [anti-ship missile] compared to a [Russian or Chinese] P-270 Moskit, 3M-54 Club or YJ-18.”

“In addition,” he adds, “one must consider crew quality, training and readiness as components of fleet power. National character and experience as a sea power also come into play. However, all of these qualities are hard to ascribe metrics to, and arms control treaties and analysts focus on measurable and verifiable metrics.”

“In the end, a fleet must be measured against what it is expected to do,” Patton concludes. “Currently, the USN has its power concentrated in high-end warships, be they carriers, large surface combatants or nuclear submarines. However, this also makes the USN susceptible to major losses, especially if defenses don’t work as well as expected.”