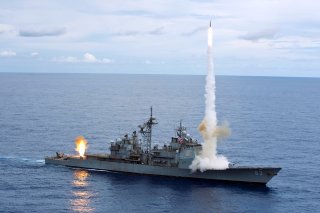 The Army and Navy are respectively planning to field hypersonic weapons in 2023 and 2025, Gilday recently told the House Appropriations Subcommittee on Defense. And while the Department of Defense is investing $21 billion into researching and developing hypersonic weapons, it is also pursuing other innovative systems, such as high-powered microwave weapons alongside U.S. industry.

In recent years, the Navy has been working with the Missile Defense Agency on the “power scaling” of laser systems with the specific aim of increasing offensive and defensive capacity at much longer ranges and with much greater degrees of power.  This means configuring expeditionary electrical power to support multiple laser beams on vessels at sea. This continues to be promising, to the point wherein high-powered lasers could soon perform missile defense missions just beneath or even above the boundary of the earth’s atmosphere.

The Navy has tested a variety of these systems, Gilday told congressional lawmakers, providing that the program will make its fleets more survivable and deadly in contested waters.

Gilday also noted that the Army’s Long-Range Hypersonic Weapon (LRHW) is slated to arrive next year, likely referring to the Army and Navy’s ongoing collaborative effort to develop a Common Hypersonic Glide Body (CHGB). While each service will use the projectile differently in terms of application, they are being engineered within a common foundation.

The Navy weapon, called Conventional Prompt Strike, has conducted a breakthrough “shot” test with the Army’s LRHW using the CHGB. Called a “flight campaign,” the test was conducted by Sandia National Laboratories as part of an accelerated effort to mature, refine and fast-track a new generation of hypersonic weapons to operational status.

“Our all-up round (CHGB) is a 34-inch booster which will be common between the Army and the Navy. We will shoot exactly the same thing the Navy shoots out of a sub or ship,” Robert Strider, deputy director of the Army Hypersonic Project Office, told an audience in August 2021 at the Space and Missile Defense Symposium.

The glide body is a warhead which gets thrust into the atmosphere at hypersonic speeds traveling at five or more times the speed of sound. Once airborne, the weapon can skip along the upper boundaries of the earth’s atmosphere before utilizing the sheer speed and force of its descent to destroy a target.