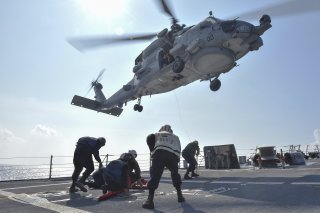 Last week, the United States Navy announced a $904.8 million contract modification awarded to defense contractor Lockheed Martin's Sikorsky for 24 MH-60R Seahawk helicopters. The contract includes $113.1 million from the Navy's fiscal year 2020 aircraft procurement account along with $791.7 million in foreign military sales money, as 21 of the submarine-hunting aircraft are for India while three are for the U.S. Navy.

The new helicopters will supersede India's current fleet of British Sea King anti-submarine warfare (ASW) helicopters and could enter service by 2024. India has been involved in a decade-long process to replace the aging British naval helicopters, but it has been seen as urgent as Chinese People's Liberation Army Navy (PLAN) warships, underwater drones and even "maritime militia" civilian-flagged fishing boats from China have been operating in the Indian Ocean.

The need for the ASW helicopters in the Indian Ocean was seen as so dire that the three originally earmarked for the U.S. Navy will be delivered to the Indian Navy by next spring, and all three will be modified to Indian standards.

"This really was one of the higher priorities the [Indian] navy had, to get these aircraft delivered," Tom Kane, director of Sikorsky's Naval Helicopter Programs told reporters as reported by Breaking Defense. "I requested that the aircraft be made available on an accelerated basis. So I think there is an urgent need."

The $28 million "Romeo" Seahawk helicopters are equipped with advanced combat systems including sensors, missiles, and torpedoes, and can be used to track and hunt enemy boats and submarines. This will include AN/AQS-22 Airborne Low-Frequency Sonar (ALFS) active dipping sonar and the AN/APS-135(V) multi-mode radar – platforms normally seen on a U.S. Navy configuration.

Defense News reported the helicopters will be armed with Hellfire missiles, Mark 54 torpedoes, and precision-kill rockets. The MH-60R was designed to be a sub-hunter, and that will remain its primary role in the Indian configuration, even as it is modified for the Indian Navy's needs.

"They want the ability to talk to their satellites obviously, so there's an Indian indigenous SATCOM data link," added Kane. "Also, they can talk to their ships so there’s a link to that they’ve asked us to install, and there’s some other modifications like a floatation system, and other things that we’ll have to [change] from the standard US Navy configuration."

This is the largest contract that Lockheed Martin's Sikorsky has signed with the Indian government, and unlike other military programs, it is not subject to the "Make In India" effort that was launched by Indian Prime Minister Narendra Modi. This deal follows a 2017 cancelation of a separate $1.87 billion ASW helicopter deal between Sikorsky and the Indian Navy, which prompted this program to be acceleration this program.

The Indian defense industry will likely be involved in any maintenance and retrofit efforts of the aircraft in the coming years.

The trio of Romeos, which are currently in preservation status in upstate New York, is slated to be the first training aircraft for the Indian crews reported USNI News. The crews will learn how to fly and operate the MH-60Rs in the United States.