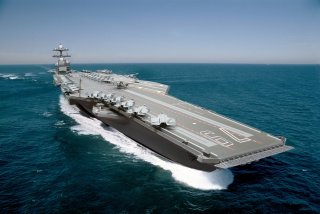 On Monday the United States Navy announced that it had modified its contracts with Newport News Shipbuilding, which will speed up delivery of the next Gerald R. Ford­-class aircraft carrier, USS John F. Kennedy (CVN-79). The contract modification will move the carrier to a traditional single-phase delivery.

The carrier had been previously slated to go through a two-phase delivery process, which would have seen the ship mostly completed while the workforce at the shipbuilding facility would have paused, and then installed the electronics and made other modifications at a later date. That plan had been unveiled in the Fiscal Year 2016 (FY16) budget as a means to construct the warship on the most cost-effective schedule for the workforce at the construction yard.

It also would have avoided an overlap of CVN-79 with USS Nitmitz (CVN-68) in the fleet, which could put a further strain on Navy budgets but also on the personnel needed to operate both vessels. By inserting a "gap" in the construction, which would delay the final delivery, the ship would have also received the most up-to-date technology just ahead of its entry into the fleet, reported USNI News.

When the decision was made to delay the carrier's delivery it was expected John F. Kennedy would be ready in 2022 with a longer overlap between those two carriers. But now the Navy is expecting that the carrier would be delivered in 2024 regardless of whether it is delivered fully outfitted or not, and for those reasons, the contract modifications have been made.

The $315 million contract will include converting the ship to a single-phase delivery, but also for install of F-35C Lightning II Joint Strike Fighter modifications. The contract modifications set a June 30, 2024, delivery date.

"We are pleased to have worked with the Navy to adopt lessons learned in the construction of USS Gerald R. Ford (CVN-78) to improve cost, production and planning efficiencies on Kennedy," said Lucas Hicks, Newport News' vice president of new construction aircraft carrier programs. "We believe that the single-phase approach ensures the most effective build plan for all remaining work and provides the best value for the Navy by supporting its ability to accelerate operational deployment of this maritime force asset."

Kennedy is now approximately 76 percent complete. The ship was launched in December 2019, and currently is undergoing additional outfitting and testing at the company’s Newport News Shipbuilding division.

The USS John F. Kennedy is the second Gerald R. Ford-class aircraft carrier being built for the United States Navy.

Additionally, each Ford-class ship can operate with a smaller crew than the Nimitz-class carriers and will provide $4 billion in total ownership cost savings for the U.S. Navy.