This U.S. Navy Submarine Has Nazi 'DNA': Meet the Tench-Class 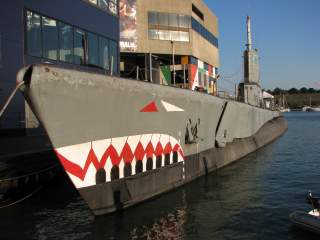 In the aftermath of World War II, the U.S. Navy submarine force faced a rapid shift of priorities, away from the tactics that were so successful against Japan to a new type of warfare against the Soviet Union. One outcome of this was the Tench class submarines, particularly those upgraded with technology inspired by captured German U-boats, designed to make them efficient underwater submarine killers.

At the end of the Second World War, the mighty U.S. Armed Forces quickly began the process of demobilizing. Within weeks of the war’s end, however, the alliance between the West and the Soviet Union began to falter, and by March 1946 Winston Churchill gave his famous “Iron Curtain” speech at Westminster College. By 1950, all of Eastern Europe was under Moscow’s control, enforced with Red Army forces setting up camp from East Germany to Romania.

The quick turnaround of the Soviet Union from ally to adversary meant the next war would be fought differently. U.S. intelligence believed that Moscow would beef up her navy—particularly her submarine fleet—to isolate North America from Europe in a future war. This was more or less what Germany had done in World War I and World War II.

Germany’s effort to dominate the Atlantic had failed both times, but the Soviet Union had an ace up its sleeve: access to the best submarine technology in the world. The Soviet Union had received two intact Type XXI German U-boats as part of a postwar agreement to divide up German equipment. The Type XXI was quieter, designed to cruise underwater longer than previous submarines and had a range of 15,000 miles.

According to Norman Polmar in his work, Cold War Submarines, U.S. intelligence predicted the Soviet Union could have between 1,200 to 2,000 submarines by the 1960s. A submarine threat that large would require an all-hands effort by Western navies to hunt them down and keep the transatlantic shipping lanes open. U.S. Navy submarines suddenly found themselves tasked with an anti-submarine warfare role.

The U.S. Navy’s Tench-class submarines were first built in 1944 to serve in the Pacific. The Tench class was built to supplant and eventually replace the highly successful Gato class. The subs displaced 1,570 tons surfaced, were 311 feet long and had a beam of 27 feet. The new submarines could reach a speed of 20 knots while surfaced but just 8 knots submerged. Its armament consisted of six 533-millimeter torpedo tubes in the bow and four rearward-facing torpedo tubes in the stern, with a total war load of twenty-four torpedoes. Secondary deck armament consisted of one 5-inch gun, two 40-millimeter anti-aircraft guns and four machine guns. The Tench submarines had a crew of eighty-one sailors.

American submarines, tasked to run down their Soviet counterparts, would do so while submerged. The Tench and other classes, however, were built primarily to run on the surface, submerging only to make attacks and evade enemy anti-submarine warfare forces. Anti-submarine warfare would require submarines to spend prolonged periods underwater, stalking Russian-built submarines designed to spend prolonged periods underwater. The U.S. submarine fleet needed extensive modifications to prepare itself for Battle of the Atlantic, Round Three.

The package, known as the Greater Underwater Propulsive Power (GUPPY) program, was designed to allow U.S. submarines to spend more time underwater, where they could hunt. Out of twenty-nine Tench submarines, sixteen were were upgraded to the GUPPY 1A standard. GUPPY 1A streamlined the submarine to decrease underwater drag, enclosing the snorkel and periscopes in a large metal fairing that served as an extension of the original sail. The prow was rounded and all external weapons, including the deck gun and machine guns, were removed. In some variants, according to Polmar, “one diesel engine was removed to provide more space for a new sonar room, air-conditioning, and the Prairie Masker quieting equipment.”

Besides underwater handling, electrical storage capacity received a major upgrade. The addition of batteries allowed a Tench-class submarine to remain underwater for prolonged periods, where it could quietly hunt submarines. This increased the chances a GUPPY 1A submarine would detect the enemy before being detected itself.

The Tench class submarines never participated in actual anti-submarine warfare combat, but they proved an important step forward in the development of modern-day submarines and submarine vs. submarine warfare. Many of Tench-class subs not upgraded to the GUPPY 1A standard were retired shortly after the war, with others remaining in service until the 1960s. Several were transferred to allied navies, with boats going on to serve in Brazil, Greece, Italy, Peru, Turkey and Venezuela. One submarine, the USS Cutlass, was transferred to Taiwan, where it still serves to this day.