The U.S. Navy is Testing Out a New Anti-Radiation Missile. Here’s What That Is. 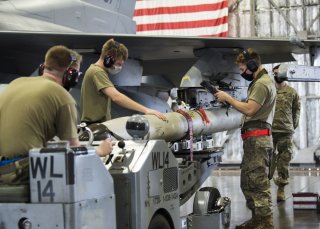 The test was the AARGM-ER’s first live-fire test and served to validate the previous modeling and computer simulations conducted by the Navy leading up to the trial. The live-fire event also validated the rocket’s motor components.

“This first live-fire event is a major step to providing our fleet with the most advanced weapon system to defeat evolving surface-to-air threats," explained a Navy official involved with the AARGM-ER missile testing. “Our Navy and Northrop Grumman team has done tremendous work executing this event and ensuring we met all test objectives.”

In addition to the F/A-18E/F and EA-18G Growler electronic warfare aircraft, the Navy plans to integrate the missile onto the F-35 Joint Strike Fighter, the United States’ premier single-engine stealth fighter, potentially opening the anti-radiation missile’s application to other branches of the military besides the U.S. Navy exclusively.

In another press release, Northrup Grumman, the AARGM-ER manufacturer, explained that the test also validated the missile’s “long-range capability of the new missile design” and usefulness as a stand-off munition.

The AARGM-ER is, in essence, a more advanced variant of the Navy’s AGM-88E AARGM, used to suppress enemy air defenses. Northrup Grumman states that the missile “leverages AARGM with significant improvements in some technology areas.”

The AARGM-ER and its predecessor are a type of missile known as anti-radiation missiles—in essence, intelligent munitions that detect radio frequency emissions or radio waves. Typically they’re used in an air-to-ground capacity, released by forward air elements to take out communications nodes or anti-aircraft defenses before further forward aircraft movement or missile salvoes.

Thanks to a networked information capability, American warplanes can launch the AARGM family of missiles before they’ve even detected a target, relying on information relayed from other sources to acquire enemy targets.

“While this event serves as a validation of this hard work, it more importantly, gets us one step closer to making our fleet more lethal,” a person involved in the missile’s development explained. “Our engineering and test teams have worked tirelessly with their counterparts across the enterprise and government teams.”

Though the AARGM-ER remains in testing, for now, the missile program has moved close to widespread service with this latest test.