Is the U.S. Navy Too Small to Protect Convoys in a War with Russia or China? 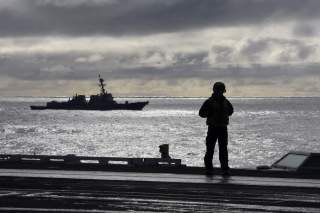 The U.S. military’s top sealift officials are worried that, in a war with Russia or China, the U.S. Navy might not have enough warships to escort vital supply convoys from the United States to war zones in Europe or Asia.

Those fears might be overblown. Regardless, the Navy is moving to acquire a new fleet of frigates whose missions include convoy-escort.

Mark Buzby, a retired rear admiral who now leads the Department of Transportation’s Maritime Administration, has been vocal about what he claimed is a dangerous shortage of escorts. The Maritime Administration oversees America’s roughly 12,000 professional mariners, who crew — among other vessels — the 61 sealift and logistics ships belonging to Military Sealift Command.

“The Navy has been candid enough with Military Sealift Command and me that they will probably not have enough ships to escort us,” Buzby told Defense News, a trade publication. “It’s: ‘You’re on your own; go fast, stay quiet,'” Buzby said.

Lacking military escorts, sealift ships would have to cross the Atlantic or Pacific alone during wartime. Buzby and Mewbourne reportedly have advised ships’ crews to turn off their electronics to avoid detection, sail as fast as possible to limit their time in danger zones and expect to suffer losses to enemy attack.

It’s clear Buzby is imagining a major conflict, such as was possible during the Cold War. For decades following World War II, the Pentagon planned to move, by sea to Europe, huge numbers of troops and large quantities of weapons and supplies. Between 1969 and 1993 NATO rehearsed this massive supply effort as part of the annual Reforger Exercise.

Buzby likely overestimates the danger Russian forces, for one, pose to transatlantic convoys. In 2017 Adm. Vladimir Korolev, head of the Russian navy, claimed his roughly 60 submarines patrolled for a total of 3,000 days in 2016. That’s equivalent to one six-month patrol by 15 separate boats over a period of a year.

By comparison, the U.S. Navy’s 66 submarines, which typically spend six months at sea every 18 months, annually patrol for around 4,000 days, combined.

Neither the U.S. nor Russian navies is patrolling at anywhere near the rate that the American and Soviet fleets did during the Cold War, when their undersea forces each were several times larger.

Likewise, the threat that long-range bombers pose to American convoys has diminished. In the late 1950s, the CIA estimated that the Soviet air force operated nearly 1,000 long-range bombers. Today the Russian air force possesses around 130 Tu-22, Tu-95 and Tu-160 bombers.

Still, the U.S. Navy is working to address its escort shortfall.

During the final years of Cold War, the U.S. Navy had roughly twice as many surface warships as it does now and planned to assign some of those ships — in particular, Oliver Hazard Perry-class frigates — to escort duty. But in recent years the Navy eliminated frigates from its force structure, preferring to devote dwindling resources to a smaller number of larger and more sophisticated ships.

Now frigates are making a comeback. In 2017 the Navy formally asked industry to propose designs for a new, missile-armed frigate. The sailing branch plans to acquire 20 of the new vessels starting in 2020.

The frigates should be able to “support transoceanic logistics movements by serving as a force multiplier to area-air-defense-capable destroyers,” the Navy stated. “If equipped with weapons providing the required capability and capacity, the ship will independently escort logistics ships during transit through low and medium threat regions.”