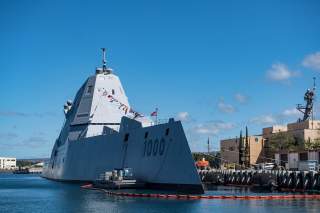 The U.S. Navy's upcoming force-structure assessment could recommend a huge expansion of the fleet's efforts to acquire robotic warships, all in order to compete with the rapidly-modernizing Chinese and Russian navies.

The multi-billion-dollar investment in unmanned surface vessels and submarines that the U.S. sailing branch is proposing as part of its 2020 budget is "an expression of the urgency the Navy is attaching to the situation," said Ronald O’Rourke, a shipbuilding expert with the Congressional Research Service.

O'Rourke and other experts spoke at the conservative Heritage Foundation in Washington, D.C. on April 15, 2019.

At present, the Navy between 2020 and 2024 wants to spend around $4 billion buying 10 large unmanned surface vessels and nine large, unmanned submarines. The Navy's new force-structure assessment, which experts expect the service to release some time in 2019, could call for even more spending on drone vessels.

Quickly buying large numbers of robotic warships could help the Navy to develop new tactics. "You are much more likely to find a way to use" single-mission, unmanned vessels than you are new, multi-mission, manned vessels, Bryan Clark from the Center for Strategic and Budgetary Assessments said at the Heritage event, according to the news website of the U.S. Naval Institute.

The large robot ship "will serve as both a sensor and a shooter," Rear Adm. Randy Crites told reporters in March 2019. The drone ships will be "smaller [and] more attritable than conventional ships, in addition to being more affordable."

"The Navy is still developing its requirements for these vessels and concepts of operation for it how might employ them, but has described the notional [large unmanned surface vessels] as longer than 164 feet in the past," The War Zone reporter Joseph Trevithick explained.

"Rear Admiral Crites would not say that there is firm, validated requirement for the drones ships, but did say that the Navy was presently working with a concept revolving around a hullform closer to 200 to 300 feet long with a displacement of around 2,000 tons. This would place the drone vessels in the same general size class as manned corvettes."

The Navy reportedly plans to use its new missile frigate as a command vessel for robotic flotillas. The 2020 budget asks for $1.3 billion for the first of 20 of the frigates.

The sailing branch hasn't yet tapped a contractor to build the drone surface ships. But it already has chosen Boeing to build its Orca robotic submarines.

The 51-foot-long Orca autonomously can sail as far as 6,500 nautical miles. "Eventually, the Navy could also use the Orca ... for mine countermeasures, anti-submarine warfare, anti-surface warfare, electronic warfare and strike missions, according to a Navy outline of the system’s capability development," reporter Ben Werner explained at USNI News.

The Navy for now is not proposing to count the new unmanned vessels against its requirement for 355 major warships. That's because the fleet is buying the ships before it has developed concepts of operations for actually deploying them in combat.

"Most key questions over how these unmanned ships will be controlled, by who and if they will deploy independently or as part of traditional strike groups, have yet to be answered," Paul McLeary noted at Breaking Defense.

While the U.S. Navy moves to quickly acquire robotic vessels, China is working on unmanned warships of its own. China Shipbuilding and Offshore International Company at a trade show in Abu Dhabi in February 2019 showed off a model of an armed, crewless boat.

"According to the product video, the drone appears to be modular and reconfigurable for the different mission areas, but it’s unclear what missions are permanently integrated into the system. In the video, JARI is shown alternately shooting down an aerial drone, sinking a submarine, machine-gunning a [small boat] full of adversaries trying to steal it (after firing warning shots) and sinking a surface ship that looked a little like a littoral combat ship."