The U.S. Navy Wants to Use Lasers To Crush One of Its Oldest Enemies 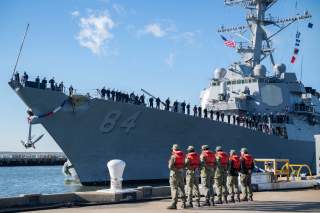 The US Navy used an MH-60S helicopter-mounted laser system to scan and detect underwater mine-like targets earlier this year during the multi-national Rim of the Pacific exercise, marking the first operational use of an emerging technology bringing much faster detection and a wider Field of View to countermine missions.

“This is the first opportunity for a non-test-centric fleet exercise. It has been placed in sailors’ hands and we are looking forward to getting training feedback and tactics feedback. This is the first real operational exercise,” Capt. Danielle George, Program Manager, Mine Warfare, told Warrior Maven in an interview earlier this year.

George said that the Navy is now analyzing findings and key data emerging from the RIMPAC exercises.

“Another system performs post-mission analysis. ALMDS collects all the data and when the helo returns, it will download. Then you have options for how you can destroy the mine,” George said.

Instead of using more narrowly configured, mechanized or towed mine detection systems, ALMDS massively expands the surface area from which mine detection takes place. Naturally, this enables shallow-water warships such as the LCS have a much safer sphere of operations as commanders will have much greater advanced warning of mine-cluttered areas.

The ALMDS pod is mechanically attached to the MH-60S with a standard Bomb Rack Unit 14 mount and electrically via a primary and auxiliary umbilical cable to the operator console, according to a statement from the systems maker, Northrop Grumman.

“It does not use any bombs. It flies at a certain altitude and a certain speed. The laser emits beams at a certain rate. Cameras underneath the helicopter receive reflections back from the water. The reflections are processed to create images displayed on a common consol on the helicopter,” Jason Cook, the Navy’s Assistant Program Manager, ALMDS, told Warrior Maven in an interview earlier this year.

Cook explained that the camera or receiver on the helicopter is called a Streak Tube Imaging LIDAR (STIL). The laser is released in a fan pattern, and photons received back are transferred into electrons, create a camera-like image rendering.

“Instead of a human out searching and sweeping, ALMDS achieves a higher rate of speed and covers a lot more area,” he added.

Along these lines, George explained that ALMDS is oriented toward shallow portions of the water column, thus brining a special littoral tactical advantage; the ALMDS will eventually be integrated into the LCS’ Mine Countermeasures mission package.

The Arete essay also talk about STIL technology also being developed and tested for use as a “missile seeker” by weapons and a sensor system for an Air Force C-130 aircraft.

Kris Osborn became the Managing Editor of Warrior Maven in August of 2015 . Osborn previously served at the Pentagon as a Highly Qualified Expert with the Office of the Assistant Secretary of the Army - Acquisition, Logistics & Technology. Osborn has also worked as an anchor and on-air military specialist at national TV networks.