The U.S. Navy Will Begin Building Constellation-Class Frigates By April 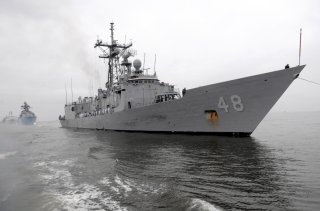 The Navy plans to formally begin construction of the first frigate, the USS Constellation, by April 2022.

“The biggest thing about a lead ship class is you have to get the design right before you start building it,” Capt. Kevin Smith, program manager for the project, told an audience at the 2022 Surface Navy Association symposium. “We're getting through our functional design and we're getting through our detailed design. We're going to have a critical design review this year. And then when we're ready, we're [going to] go ahead and move into the production phase of the ship Constellation.”

The Navy has set an ambitious timetable and seems to be on track to keep pace with its plan to begin development on fifteen frigates within five years.

“We have three ships now that have been named the Constellation, the Congress, and the Chesapeake. Two of those ships have been awarded to Fincantieri, and the USS Chesapeake is an exercise option that we'll be looking at this fiscal year,” Smith said.

The Navy is working with Italian shipbuilder Fincantieri to build as many as two new frigates each year. Fincantieri is standing up a land-based engineering facility in Philadelphia to “burn down risk” by carrying out development, tests, and integration efforts. Smith noted that the Navy has learned the importance of “reduc[ing] risk as much as possible on the land-based test side.”

Smith said that the Navy hopes to extend the ships’ service lives past the currently planned twenty-five years by strengthening their hulls. The Constellation will come in at 496 feet long and will displace 7,300 tons. The frigate’s size and weight specifications are, by design, intended to fit between littoral combat ships and DDG 51 destroyers. While the frigates are not being built with the kinds of armaments used on destroyers, they will still be armed with heavy weapons, Aegis radar, and missile-launching vertical launch systems.

The Navy is now making its final tweaks and assessments to the design. Recognizing the importance of the project, the Navy plans to fast-track construction.