The U.S. Navy Will Have Major Problems In a War If 1 Thing Is Not Fixed 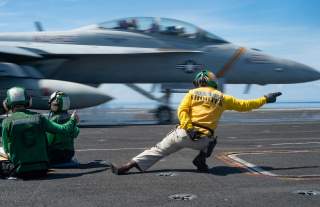 The White House cast doubt on the U.S. Navy’s plan finally to modernize its aging fleet of sealift ships.

The Office of Management and Budget, the executive branch’s spending agency, in a Dec. 16, 2019 memo directed the Department of Defense to draw up a cheaper plan for new vessels.

The Navy planned to replace many of its roughly 120 sealift vessels, which Military Sealift Command operates on behalf of the wider fleet, with the so-called “Common Hull Auxiliary Multi-Mission Platform,” or CHAMP.

CHAMP is a common hull the Navy wants to use for transports, hospital ships and repair vessels. But a transport version of the CHAMP could cost $1 billion, the Navy estimated. A submarine tender using the CHAMP hull could set back U.S. taxpayers no less than $1.3 billion.

That’s too expensive, OMB asserted, according to Defense News. “The Navy should not proceed with CHAMP development for a sealift vessel and should seek legislative relief to procure additional used sealift vessels” in 2021, the memo states.

Any savings should go toward aircraft carriers, submarines and destroyers. “Procuring used sealift vessels and submarine tenders would also allow the industrial base to prioritize the administration’s battle-force ship procurements.”

The White House’s push-back against CHAMP comes as the Navy already faces a looming shortage of sealift vessels. MSC operates around 120 ships. The civilian merchant marine, which during wartime would become an auxiliary force under the Navy, possesses an additional 180 U.S.-flagged vessels.

By 2048 the sealift force needs to grow from today’s 300 ships to 360 in order to successfully support the Navy and resupply U.S. military forces during a major war, the Washington, D.C. Center for Strategic and Budgetary Assessment warned in a May 2019 report.

The fleet should add 48 tankers ships to its current 21 tankers, add 20 salvage ships to the five it has in 2019 and boost the number of repair tenders from two to 17. Munitions ships should number 25, up from 12 in 2019. There should be seven hospital ships, up from two.

Adding more than 60 ships to the sealift fleet while also replacing the oldest existing vessels is a tall order, especially if the Navy builds new CHAMP ships for most of the expansion. It could cost billions of dollars.

And that spending could undermine the Navy’s efforts to expand its front-line fleet from today’s 290 ships to 350 or 355. The Navy has begun to signal that it cannot afford to build a 350-ship battle force. The sailing branch’s proposed five-year spending plan cuts back on new destroyers and decommissions cruisers and, over the short term, actually would shrink the fleet below 2019 levels.

Kevin Tokarski, a senior official with the U.S. Maritime Administration, in May 2019 told USNI News that he was considering reflagging some ships working for American companies in order quickly to grow the sealift force.

But the Navy wanted to acquire used ships in addition to buying new vessels with the CHAMP hull. The OMB memo could signal a shift in that plan, whereby used vessels would account for the bulk of the sealift modernization.