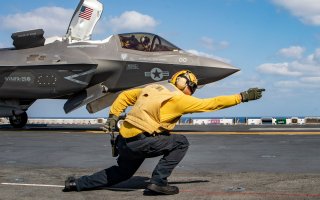 The Navy accepted delivery of the guided missile destroyer, the future USS Daniel Inouye, from shipbuilder General Dynamics Bath Iron Works, March 8. As the Navy adds another new Destroyer to its growing fleet of attack warships, many wonder if the service’s 500-ship ambitions remain afloat given the new budget environment led by a new Joe Biden administration.

Within just the next fifteen years, the Navy plans to add as many as thirty DDG 51 Destroyers, including twenty-two new, high-tech DDG 51 Flight III warships and eight state-of-the-art DDG 51 Flight IIA destroyers, according to the service’s most recent thirty-year shipbuilding plan.

Prioritizing such a large number of these warships offers an interesting analytical window into Navy thinking about the next five decades of ocean war. The plan signifies a broad service alignment with its Distributed Maritime Operations strategy which, among other things, seeks to massively increase lethality and sensor networking across vast swaths of ocean in real time.

In addition to adding thirty new destroyers, the Navy’ also seeks fifteen Littoral Combat Ships, eighteen of the new frigates and as many as thirty-two new attack submarines in the next fifteen years. While many new ships are now under construction, the current number of Navy ships is roughly in the high 280s, a number the Navy hopes to grow to 355 by 2034.

Interestingly, while 355 ships by 2034 may still appear to be the objective, one thought to consider is that during President Biden’s previous time in the Barack Obama administration, there was a decided interest among the political leadership to operate a smaller number of actual ship platforms while making a special effort to ensure technological overmatch and tactical advantages. The concept during the Obama years was to embark upon a massive Pacific pivot with a technologically superior, yet numerically smaller Naval force. This plan was further enabled by new long-range precision weapons and more robust ship-to-ship networking systems connecting otherwise separated points of attack. Effective networking, high fidelity sensors, manned-drone-boat teaming and precision weaponry, however, are all expected to figure prominently as the service surges forward into an entirely new threat environment.