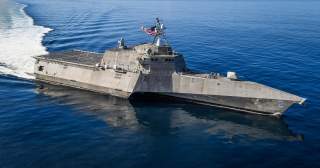 These are waters that make headlines, including the Mediterranean Sea, Persian Gulf, and the seas shoreward of Asia’s first island chain. Hughes was a great proponent of dispersing sensors, firepower, and command-and-control among as many platforms as possible. A fragmented navy task force might lose an individual unit in action, but it would lose just a small percentage of its aggregate combat power. Heaping multi-mission capability onto a single hull like a cruiser or destroyer, by contrast, risks forfeiting all of that capability in a single firefight with the enemy. Declares the tactics sage: in an age when hostile naval capability resides in large part in shore-based aircraft and missiles, and in small seagoing craft, it’s better for the U.S. Navy “to fight fire with fire, using expendable, missile-carrying aircraft or small surface craft” of its own to prosecute the fight for littoral access. It’s “taboo” to send capital ships into contested near-shore expanses.