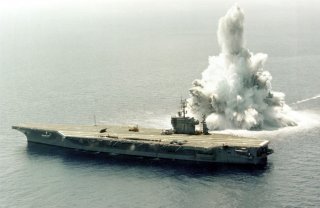 The USS Gerald R. Ford (CVN-78), named for the 38th president, is a leading naval aircraft character, currently in the Atlantic Ocean. As The National Interest reported back in 2019, the Gerald R. Ford contains 10 elevators, which can carry up to about 200,000 pounds of weapons from the main deck magazine to the ship’s flight deck preparation area.

Last week, USNI News reported from aboard the ship about life aboard the Gerald R. Ford under its new commanding officer, Capt. Paul Lanzilotta, as the ship begins preparations for its shock trials later this year. The visit took place on March 9.

Following 12 years of construction, the Gerald R. Ford was delivered to the Navy in May of 2017, replacing the U.S.S. Enterprise.

In the shock trials, per the USNI report, “the Navy will set off a bomb in the water near the new warship and measure how well it could take a hit.”

“During World War II, it was discovered that although such “near miss” explosions do not cause serious hull or superstructure damage, the shock and vibrations associated with the blast nonetheless incapacitate the ship, by knocking out critical components and systems,” a MITRE assessment from 2007, called “Navy Ship Underwater Shock Prediction and Testing Capability Study,” stated.

“Any complex system requires constant attention and maintenance. And the steam catapult system obviously still serving today overseas, deployed, doing the work of the republic every single day (on the Nimitz-class carriers), that requires a lot of manpower and a lot of man-hours and woman hours on the flight deck,” Captain Lanzilotta told USNI.

“When we stop flying here at the end of the day – so last night we finished – I don’t know, XO: what was it, midnight-30? Almost one in the morning? On a Nimitz-class aircraft carrier, you would then have two to three hours of preventative maintenance to do on all that kit before you can close up shop for the night and get a bite to eat and get some rest for the next day of flight operations. On this ship, our sailors literally put (EMALS) in standby mode, and get the same bite to eat and go to bed. Those are hard-to-measure benefits, but in my mind they’re huge.”