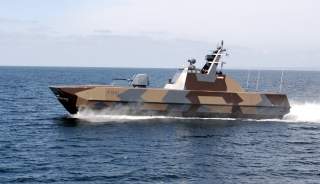 And the service also should buy carrier ships to transport and support the short-range corvettes in combat zones.

The Navy in the 1970s developed a class of missile-armed hydrofoils, but canceled acquisition of the type after building just six. More recently, the Navy conceived of the Littoral Combat Ship as a small fighting vessel, but in development the type grew to the size of a frigate and shed much of its weaponry.

Smith advised the Navy to try again. “The solution to the naval littoral problem is merging sea-basing with the Navy’s World War II and Cold War fast-attack concepts.”

One of the fastest naval platforms afloat, the Skjold can do 60 knots, carries eight Naval Strike Missiles (a weapon coming to the U.S. inventory), a 76-millimeter OTO Melara cannon (also familiar to the U.S. Navy) and a crew of 20 or fewer.

Loaded with fuel and missiles for rearming, a corvette carrier could rapidly deploy two stealthy corvettes such as the Skjold with an 800-nautical-mile range, capable of threatening an adversary surface fleet or naval base with a barrage of surface-to-surface missiles.

Taking this concept further, the Navy could use existing expeditionary sea base ships (the Lewis B. Puller [ESB-3] class and the Montford Point [T-ESD-1] class) to carry four to five missile corvettes into a theater of its choosing, providing the potential for swarming fast-attack ships—and posing a new problem to adversaries in their home waters.

A flotilla of missile corvettes with their support ships could fit into the U.S. defense establishment’s evolving concept for defending against a Chinese sneak attack targeting U.S. allies in the western Pacific.

“The U.S. military has a problem in the western Pacific: the tyranny of distance and time,” analysts Thomas Mahnken, Travis Sharp, Billy Fabian and Peter Kouretsos, explained in a new study “Tightening the Chain: Implementing a Strategy of Maritime Pressure in the Western Pacific” for the Center for Strategic and Budgetary Assessments in Washington, D.C.

In the aftermath of a surprise Chinese attack, “American forces located outside the conflict area would have to penetrate China’s anti-access/area-denial network to restore the status quo ante, a daunting proposition.”

Chinese forces would be particularly numerous and capable along the “first island chain” that stretches from Japan to The Philippines.

Some troops -- in particular, U.S. Army and Marine forces with mobile rocket launchers, supported by a few Navy ships and small contingents of U.S. Air Force warplanes -- would hunker down on and around islands near China, preparing to hit Chinese troops from inside China’s own expanding lines.

As part of this concept, missile corvettes could sail close to islands in order to avoid detection on radar. After Chinese forces bypassed the islands, the small, fast warships would strike back with their missiles. Carrier vessels would re-arm, refuel and repair the corvettes.

“The technology already exists and the cost is a fraction of new capital ships,” Smith pointed out. “Given a dedicated strategy to get corvettes into theater quickly, the Navy could project a littoral capability worldwide.”