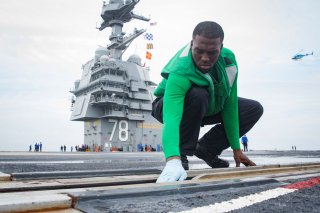 The USS Gerald R. Ford (CVN 78) recently completed the tests to prove that the latest aircraft carrier to enter service can launch and recover jets. Now the U.S. Navy has announced that it has the largest air wing embark to date. In addition, the Ford completed its first ordnance movement from a lower deck magazine to the carrier’s F/A-18E Super Hornets using the ship’s state-of-the-art Advanced Weapons Elevators.

In a teleconference, the Commanding Officer of the carrier, Captain J.J. Cummings and Commander, Carrier Air Wing (CVW) 8, Captain Josh Sager, explained that the CVW-8 embarked seven squadrons and is operating nearly 30 fixed-wing aircraft and both of their Helicopter Sea Combat squadrons. This serves as an opportunity to stress and test the carrier’s unique design, and to demonstrate further her ability to conduct integrated air wing operations.

“This is a historic underway—we embarked nearly 1,000 Sailors, the largest air wing embark to date, and we were able to commence cyclic operations and it’s proven successful,” said Cummings. “It’s exciting to have the air wing onboard and get into their spaces and berthings so they can help us tighten things up to where they want them to be.”

USS Ford, which is the first of a new generation of aircraft carriers and will represent the future of naval aviation, is now the most advanced and capable warship in service was built with larger deck space. This enables a higher sortie rate for attack missions, while other technologies employed in the ship create the opportunity for the air wings to quickly rearm and refuel fighters, which enables them to be sent back into the air for further attack missions.

The carrier’s air wing has been conducting a “crawl, walk, run” approach, which has been ramped up to three days and two nights of integrated events with only a short break between the day and night missions.

Captain Sager said this is the first time the CVW-8 squadrons were able to execute all of their missions aboard the Ford.

“We’re thrilled to be here dropping light and heavy inert ordnance; but the biggest thing as the air wing commander is to do our primary mission: war at sea, air defense, air superiority and power projection,” added Sager. “We’re taking [Ford] from carrier qualification to a mission that focuses on combat operations and expanding that capability. It’s been an honor to take [Ford] to a ship that’s able to execute the Navy’s warfighting mission.”

More than 250 of the ship’s sailors—who were assigned to the weapons department—executed multiple training packages on buildup, transport and break down of ordnance to build up their proficiency. This included inert ordnance missions that transferred the ordnance from a lower level magazine to the flight deck via the ship’s lower stage weapons elevator (LSWE). To date, the ship has conducted more than 9,751 cycles of the upper stage elevators and 109 cycles of the LSWE 5.

“We moved 40,000 pounds of inert, or not live, ordnance,” added Cummings. “We loaded it on our ship a week ago and moved them to our magazines. Our team then built up the bombs and used lower stage five to get them to the hangar bay. From there, we transferred them to the weapons handling transfer area via an upper stage elevator where we issued the weapons to squadron ordnance personnel for eventual loading on aircraft, on the flight deck, for training missions. It was a monumental day, and everything worked as advertised.”

In April, the Navy announced that the carrier had completed the testing of its vital combat systems while underway in the Atlantic Ocean. And recently, the carrier has prepared to test its communications systems, whereby the ship’s voice and data link systems will undergo sea trials to demonstrate the ability to perform command and control with other ships. The C2 systems facilitate battle information sharing across naval ships and aircraft. Moreover, during the tests the Ford will establish connectivity with the USS Harry S. Truman (CVN-75), which has remained at sea during the ongoing novel coronavirus pandemic.

However, it hasn’t been entirely “smooth sailing” for the Ford.

Last week one sailor tested positive for the coronavirus, and as a result about 100 members of the fighter squadron aboard the carrier were taken off the ship as a “precautionary measure.” Earlier this year the Ford, along with the USS George HW Bush (CVN 77) were in the spotlight when it was reported that the toilets clog frequently—and that unclogging the systems can cost upwards of $400,000 per fix.

Despite these problems, the tests have gone well for the new carrier.

“We’re happy to do our job and do what we’re paid to do, and that’s launch and recover aircraft day and night,” said Capt. Cummings. “Our Sailors are fired up to perform the job they have been trained to do which brings smiles to their faces. Morale on our ship is up pretty high right now because we’re doing our job every day, and we’re loving it.”