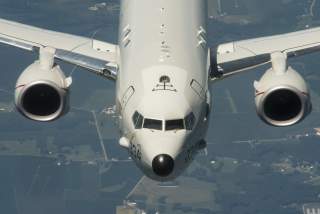 A Japanese photographer with the Twitter handle @SuneKuma01 on April 7, 2019 tweeted several photographs depicting a Navy P-8 taking off or landing at Kadena Air Force Base in Japan's Okinawa prefecture on the same days as the tweet.

The P-8 with the tail code "LA," part of Patrol Squadron 5 based at Naval Air Station Jacksonville in Florida, is carrying a long fairing on its belly. The fairing apparently houses an APS-154 Littoral Surveillance Radar System.

The APS-154 transforms the P-8 into a surface-surveillance platform similar to the U.S. Air Force's E-8 radar plane.

VP-5 is one of 15 Navy patrol squadrons. The units deploy all over the world for anti-submarine and surface-warfare patrols. With the APS-154, the squadrons also could spot and track moving targets on land.

One of VP-5's recent deployments involved several P-8s flying alongside U.S. Air Force B-52 bombers and planes from the aircraft carrier USS Ronald Reagan for a September 2018 war game near Guam.

The Navy is almost done buying 122 P-8s from Boeing at a total cost of around $33 billion. The twin-engine jets, which are variants of the 737 airliner, replace turbo-prop-driven P-3 patrol planes. The P-3 can carry an older version of the APS-154 called the APS-149. Raytheon builds both sensors.

"It is said the sensor is so sensitive that it can even pick up a formation of people moving over open terrain," Tyler Rogoway in 2014 wrote about the APS-149. "Also, the speed of the system's double-sided [electronically-scanned] array allows for multi-mode operations at one time with near-360-degree coverage, meaning that scanning, mapping, tracking and classifying targets can all happen near simultaneously, resulting in massive amounts of data for multiple platforms and decision makers around the theater and beyond to exploit."

"It is also said that the system works incredibly well for tracking high-value targets, and is able to consistently follow their vehicles, map the locations they frequent for movement and basically make it very hard for them to hide," Rogoway added.

With the pairing of the P-8 and APS-154, the Navy is pursuing a very different surveillance strategy than the Air Force is pursuing. For decades the Air Force's E-8s, variants of the 707 airliner, have flown the same kind of target-tracking missions that the P-8s currently perform.

But the Air Force is worried that the big, lumbering E-8s can't survive in high-intensity warfare. After several years of debate, in 2018 lawmakers finally allowed the Air Force to begin retiring the 17 E-8s starting with three aircraft in 2019.

Rather than replacing the E-8s with a new, purpose-built surveillance plane, the flying branch now is developing the Advanced Battle Management System, a network of sensors that could spread the E-8's capabilities across a range of fighters, drones and other aircraft.

“The Advanced Battlefield Management System will give us the capability to access both restricted and non-restricted airspace,” said Sen. David Perdue, a Georgia Republican. “This is a necessity in supporting our troops in harm’s way as well as our overall intelligence-gathering.”

The Navy clearly still believes a big surveillance plane can survive in wartime. Other countries in theory could acquire the P-8-APS-154 combo, as well. Australia, India, the United Kingdom, Norway, New Zealand and South Korea are buying P-8s.

The British Royal Air Force, in particular, is interested in equipping its P-8s for surface-surveillance. At present, the RAF operates four Sentinel surveillance planes that are like miniature E-8s, but London plans to retire the Sentinels in 2021.

The RAF's nine P-8s could fill in, Philip Dunne, then minister for defense procurement, said in 2016. "The Ministry of Defence expects the P-8 Poseidon to be principally used in the maritime patrol aircraft role, although it does have a limited overland surveillance capability," Dunne said.

"We will be examining options to improve its overland capability but no plans are yet in place and no decisions have yet been taken."