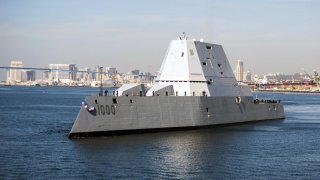 It isn't actually uncommon for some military warships to never fire their guns in anger—notably the HMS Dreadnought never participated in any First World War naval battles despite being designed to engage enemy battleships. When it comes to modern warships we must hope that the need to use them in combat can be avoided, but actually testing the weapons is necessary to maintain that peace.

This is why it was a big deal that the U.S. Navy's USS Zumwalt (DDG 1000), which departed on its first operation in April, has now finally actually concluded a structural test fire of its Mark 46 MOD 2 Gun Weapons System (GWS).

The Mark 46 GWS is a remotely operated naval gun system that uses a 30mm high velocity cannon along with a forward looking infrared sensor, low light television camera and a laser rangefinder for shipboard self-defense against small, high-speed surface targets. The GWS is already a program of record that has been successfully installed and operated on LPD-17 and LCS class ships.

The test firing on board USS Zumwalt was the first large caliber weapons firing event for the new class of destroyers. It occurred just three weeks after the Navy officially accepted delivery of the combat system.

"The privilege of being a ‘first-in-class’ ship includes having the opportunity to systematically conduct testing across the breadth of systems installed onboard the ship," said Capt. Andrew Carlson, Zumwalt's commanding officer, in a statement. "The real plus is conducting those tests, such as today's live fire with the Mark 46 GWS, which provide tangible evidence of combat capability maturation."

The structural test fires were to assess the structural and electrical components of the ship against shock and vibration of the weapon firing, as well as to measure any potential hazards to personnel or degradations to adjacent equipment as a result of the firing live ordnance.

The $4 billion ship was commissioned in 2016, but broke down while passing through the Panama Canal just a month later. It has faced other delays and cost overruns, but the Navy has called the delivery of the warship a "major milestone," as it had originally planned to buy more than two dozen of the stealth destroyers, which has been reduced to just three.

The Government Accountability Office (GAO) had called out the Navy for ongoing problems with the ship's originally planned 155mm deck guns. It was found that each round for the guns cost around $800,000. Since last year the Navy has explored other options for the Advanced Gun Systems. As a result the role of the destroyers has changed from land attack to offensive surface strike—and modifications to make that switch cost around $1billion the GAO noted as reported by Business Insider.

Despite the issues, the second of the Zumwalt-class, the USS Michael Monsoor, is undergoing combat system activation at her homeport of San Diego, while the third and final ship, the USS Lyndon B. Johnson, is currently under construction in Maine.