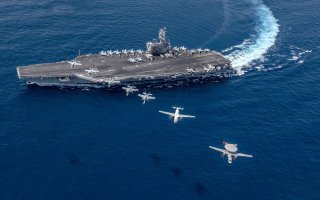 Later this summer, the U.S. Navy’s only forward-deployed aircraft carrier USS Ronald Reagan (CVN 76), will be making a rare deployment to the Middle East in support of the U.S. withdrawal of forces from Afghanistan. The Navy announced that the carrier, which is homeported in Yokosuka, Japan, would begin the deployment in the coming weeks.

That mission will leave no U.S. carrier in the Asia-Pacific region for an unknown period of time. However, the U.S. Seventh Fleet, which is based in Japan, would still have dozens of other ships and aircraft to maintain a presence.

The move to send “The Gipper” to the Middle East region has been seen as controversial, which could explain why last week the commander of the U.S. Pacific Fleet, Adm. Samuel Paparo, met with the commander of Carrier Strike Group (CSG) 5, Rear Adm. Will Pennington and warfare commanders from CSG-5 aboard USS Ronald Reagan.

It was the first time that all of CSG-5 leadership could meet in person in advance of the planned deployment this year, but it is unclear if part of the discussion included the role the strike group will play in support of the U.S. forces from Afghanistan. After meeting with the warfare commanders and commanding officers from the strike group, the Pacific Fleet admiral addressed the crew over the ship’s announcement system from the combat direction center.

“It was very important to me to come out and talk with you, here, as you continue to hone the razor’s edge to be ready for combat throughout the world,” Paparo told the crew. “I have a particular appreciation for you and your teamwork, your hard work, your combat readiness, your fidelity, and your zeal. I could not be more proud to be associated with this team.”

USS Ronald Reagan and USS Shiloh departed Yokosuka, Japan, in mid-May to begin their current deployment, and were joined by Halsey, which from Hawaii at the end of May.

“It is incredibly important for our team to hear from the commander of Pacific Fleet,” said Cmdr. Kelechi Ndukwe, commanding officer, USS Halsey. “I’m going to reiterate to my crew what he said about the incredible environment we’re operating in.”

During the meeting with the leadership, Paparo reportedly touched on a variety of topics, many of which will serve as a guide for sailors in the days ahead.

“It’s great to hear from the former U.S. 5th Fleet commander and the perspective he now brings as Pacific Fleet commander,” said Cmdr. Justin Ott, the commanding officer of the ‘Golden Falcons’ of Helicopter Sea Combat Squadron (HSC) 12. “Knowing the admiral’s thoughts on making an impact as leaders helps greatly as we continue our deployment.”

Carrier Strike Group 5 is currently deployed to the U.S. 7th Fleet area of operations in support of security and stability in the Indo-Pacific region. It is the largest forward-deployed fleet in the world, and for more than seventy years has worked with more than thirty-five maritime-nation allies and partners in the Indo-Pacific region to help preserve peace and prevent conflict.