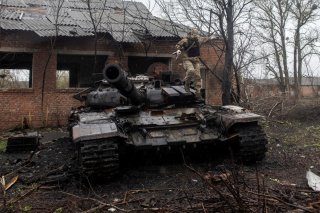 Ukraine has added air-launched anti-armor attack drones to its arsenal and is set to use the weapons to bring real pain to the Russian military.

Pentagon officials say the United States is delivering as many as 121 drones, some of which have already arrived. U.S. weapons experts are training the Ukrainians on how to use them.

“The Phoenix Ghost was in development by the Air Force before the war in Ukraine, and as we began to look across the department at programs that were in various stages of development, we realized that some of the very things that we were developing the Phoenix Ghost to do would be very useful to the Ukrainians,” a senior Defense Department official said, according to a transcript. “[I]t [the Phoenix Ghost] was already in development, but as we looked at the capabilities of it, it was clear that it could be useful to them in the kind of fighting that they're doing in the Donbas,” the official continued.

Easily launched vertical surveillance and anti-armor attack capabilities could be extremely impactful in an urban setting where Ukrainians are fighting to repel Russian armored units. They could be launched from hidden locations in buildings, be used to surveil approaching enemy forces blocks or even miles away, and even descend upon Russian armored vehicles from the air. Such capabilities provide the Ukrainians with a near 360-degree attack envelope in an urban warfare setting, given that Javelins, crew-served weapons, armored vehicle cannons, and other hand-held weapons can attack from the ground.

The Phoenix Ghost is a relatively new Air Force program, but it appears well-suited for the kinds of missions the Ukrainians are undertaking against Russia. In fact, the Ukrainians may discover additional uses for the drone, including using it to identify targets for ground-fired artillery on the other side of a ridge or building. Should these drones be networked to ground units, vehicles, or even command and control centers, targeting data could flow quickly from point of collection to “shooter” or method of attack.

Moreover, even if some Russian tanks are armed with active protection systems, most of them are not hemispheric, meaning they cannot detect or intercept incoming attacks from overhead. Therefore, should the Phoenix Ghost descend from above and explode on top of tanks and other armored vehicles, it could potentially provide Ukrainians with a distinct advantage.