The U.S. Is Preparing For a Land War Against both Russia and China 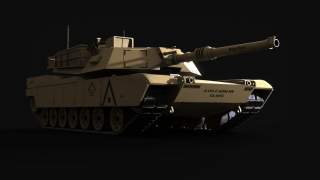 Key Point: The U.S. Army is developing technology that'll give it the ability to fight Douglas MacArthur's feared land war in Asia.

(Washington, D.C.) If a large mechanized unit of armored ground forces were “closing” with an enemy amid heavy artillery and cannon fire - but did not have overhead aircraft or satellite surveillance while transiting rigorous terrain - how could they fully discern the source of incoming fire? How might they pursue the safest and most lethal method of attack?

Perhaps long-range ground sensors are obscured, hacked or disabled, air support is compromised, or GPS signals are jammed -- how might an advancing ground force attack a major-power enemy? Fast-moving, soldier-led ground reconnaissance might be the best ISR (intelligence, surveillance, reconnaissance) options for the attacking force. A mission of this kind would of course be improved by using air-dropped transport for ground squads able to transport forward-operating infantry across multiple-points of entry.

The service is now refining its requirements for the vehicle, intended among other things to enable units to “change patterns of operations faster than the enemy can respond,” Army developers explain.

The Army plans to receive its first prototypes from three vehicle-makers as soon as this year to begin a process of evaluation, operational assessment and combat performance. In late August, the Army picked Oshkosh Defense/Flyer, General Motors Defense and Polaris/SAIC to build two prototype vehicles each as a step toward having an operational ISV by as soon as next year.

According to Army requirements, the vehicle must be able to sling-load beneath a UH-60 Blackhawk or fit inside a CH-47 Chinook. This kind of versatility seems entirely consistent with the Army’s growing emphasis upon rapid deployability and expeditionary operations.

Considering “dismounted reconnaissance,” a chapter in the book called “Dismounted Reconnaissance in the Division and Corps Deep Area,” states that the Army deactivated special long-range ground surveillance detachments as of 2017. However, the chapter, written by Maj. Brandon Terry, cites a modern need for ground recon units to operate in major warfare circumstances where other ISR possibilities may not exist.

“While the dedicated (ground recon) unit may no longer exist in the conventional force, the need for the capability endures and could be needed in future large-scale combat operations against peers challenging and disrupting other reconnaissance methods,” Terry writes.

It goes without saying that the ISV does indeed align with this kind of strategic focus -- by seeking new deployable, high-tech, high-speed forward reconnaissance vehicles intended to transport dismounted infantry squad-missions. The vehicle is being built to transport an entire 9-man squad.

Terry’s chapter in the book begins with a relevant and interesting quote about the importance of dismounted reconnaissance.

…..Only he can go places where the infrared or the aerial camera cannot go…—Colonel Harold R. Aaron

Given its historical focus, the Army University Press text includes a chapter on Hitler’s WWII Blitzkrieg wherein Panzer tanks rapidly advanced straight through enemy lines. These kinds of rapid advances of course at times followed input from dismounted recon units tasked with finding the enemy’s most vulnerable points for attack. The need for forward ground-mobile recon in major power war is well documented, and Army strategist believe it is just as if not more crucial in a modern, high-tech battlefield with drones, surveillance planes, GPS and long-range fires.

Sure enough, Herrick’s point about combat maneuver, “repositioning” and multiple-entry attacks is mirrored by the Army’s FM 3-98 Reconnaissance and Security Operations doctrine, cited by Terry’s essay. This Army doctrine, as described in the text, lists some of the key fundamentals of recon, to include “gaining and maintaining enemy contact,” not keeping recon units in reserve and retaining “freedom of maneuver.”

“Once vehicles arrive at ATC in November, all production prototypes will complete various performance, operational and characteristics tests, expected through December 2019, Following the testing at ATC, the vehicles will be moved to Fort Bragg, N.C., (anticipated in January 2020) for operationalized assessments via a Soldier Touch Point,”Herrick said.

Not surprisingly, the ISV is intended to support Infantry Brigade Combat Teams to supplement and potentially replace the service’s existing A-GMV 1.1.

“Any piece of equipment carried by a soldier is aligned at the squad level; tripods for crew-served weapons, rucksack and equipment for mountaineering,” Mathew Walker, Senior Capability Developer, Soldier Lethality Cross-Functional Team.