A U.S. Space Force: Will It Ever Be Launched? 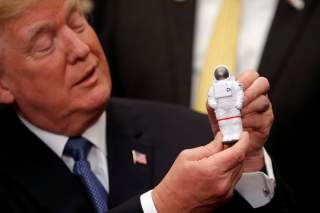 Pentagon officials have outlined their plans for a U.S. Space Force, but as a new Congress gets underway, the question is: Will it ever be launched?

The new Democratic majority in the House of Representatives is unconvinced such a force is necessary. Perhaps a quick review of what led to this force being proposed, what has been done to date, and what this force would mean for our capabilities in space will give lawmakers some much-needed perspective.

Americans have enjoyed the technological advantages of space more than any other nation on earth. Indeed, we now rely on it for nearly every aspect of our lives. Banking, commerce, travel, entertainment, the functions of government and our military all depend heavily on our assets in space.

Unfortunately, adversarial nations are aware of that dependency—and they’ve positioned themselves to move against it.

It is public knowledge that Russian and Chinese militaries now have the capability to put American space assets at risk—and that we haven’t taken steps to protect those systems, much less developed our own warfighting capability in that domain. This month, for example, marks the eleventh anniversary of China’s anti-satellite test, which was the worst debris-generating event in the Space Age.

In 2017, a concerned bipartisan Congress directed an independent study of the organization and command and control of space assets within the Department of Defense. Its final report was issued last August and recommended a two-phased approach to rebuilding our dominance in this all-important domain.

The first phase uses the administration’s current authorities to establish several foundational elements for a credible warfighting capability—and relies on Congress to establish a sixth service that can sustain that capability in the second phase. In the months since the study’s release, the Trump administration has taken several steps toward implementing the first phase.

On December 18, the president ordered the establishment of Space Command, the eleventh combatant command within the Department of Defense. Just as Central Command is responsible for military operations in the Middle East, Space Command will be charged with planning for and conducting peacetime and combat operations in space. The president expects to formalize the order by signing a revised Unified Command Plan early this year.

Combatant commanders execute their peace and wartime roles with equipment and personnel provided by the Army, Navy, Air Force and Marines—the four standing services established within DoD by Title 10 of the U.S. Code.

Equipping America’s military for space operations has been a challenge for several decades due to the fragmentation and overlap in the six different organizations that manage requirements, and eight others that deal with acquisition. On top of that, no one is in charge of either process, and the associated dysfunction has contributed to program delays, cost increases, and even cancellations.

To quell those issues, the administration has directed the establishment of the Space Development Agency (SDA) charged with acquisition and development of leading-edge space systems.

While the Air Force has the preponderance of space systems and assets, all four services currently have disparate units and organizations that are tied to space. Within the whole of the Department of Defense, there are actually sixty such organizations, and there is no entity or individual that effectively governs any critical effort for the department, or holds the reins for the lot. The SDA study and the reorganization that follows will streamline the development and acquisition of space assets for the entire department, and equip the warfighter with cost-effective, leading-edge satellites and space systems.

America’s Air, Land and Naval combatants are trained and equipped by services established specifically for those domains, and the forces combatant commanders receive from each are born, bred and operate within and from the same tactics, standards and doctrine.

Unfortunately, there is no comparable force provider for the domain of space. The personnel this new unified combatant commander receives will come from all four services. Each has developed their own standards, organizations, equipment and personnel for this mission. Perhaps the only thing principals from all parties unwittingly agree on is that this same haphazard method is what caused the United States to fall behind the space warfighting capabilities of Russia and China.

As a first step toward building a cadre that can dominate space, the Trump administration has directed each of the services, the National Guard and Reserve to identify their military and civilian space professionals for placement in a pool referred to as the Space Operations Force. While the forces will remain in their respective parent organizations (for now), they will be managed as one community.

By establishing Space Command, the SDA and the Space Operational Force, the administration has set the stage for the second phase of the plan to reorganize the Department’s space assets—the christening of a new service. In order to establish a new branch of the military, with all the required services, facilities, and support functions, Congress will need to change Title 10 of the U.S. Code.

Members of the media were shown draft legislation in mid-December for a U.S. Space Force. If enacted, it will establish the force as the second service under the Secretary of the Air Force. Many congressional leaders on both sides of the aisle question the benefits of such a move, particularly when weighed against the cost. But while additional personnel will be needed to support the Space Force Chief of Staff, professional military schools and the like, almost all of the cost estimates are overstated.

The vast majority of military and civilian personnel, as well as the facilities required to establish this new service, already exist in the Department of Defense. The annual personnel costs for ten thousand additional uniformed service members has been estimated at $1 billion, and the number required to fill the new staff and support functions would be less than half that number.

But even if the cost were deemed substantial, what would be lost if Congress forgoes this opportunity? And what more would be gained beyond if the Space Force comes to be?

If Congress chooses not to create the Space Force, then the administration’s phase-one efforts would still have a positive impact. Space Command and the SDA will still be created and, while the former will establish war plans that influence the SDA’s development and acquisition efforts, the benefits of both would be sub-optimized without the creation of the new service.

However, the space warfighters provided to Space Command by the services would still arrive with differing backgrounds, standards and overarching mindsets—and space doctrine would remain a subject of debate between the services rather than an accepted guide for action. The overall number of agencies and organizations that control some aspect of space would likely fall below sixty, but the hope of significantly reducing the bureaucratic mire or improving peacetime command and control would fall well short of the mark, likely leaving the United States in a tail chase with its two greatest global rivals.

If, on the other hand, Congress elects to embrace phase two and incorporate the Space Force into Title 10, then they could significantly accelerate America’s space activities. The number of Department of Defense space organizations and agencies could easily be cut in half, with a principal at the helm of and accountable for the decisions of each body.

Personnel identified within the Space Force could move rapidly into locations such as Schriever and Peterson Air Force Bases in Colorado, as well as Patrick AFB in Florida, to form the body of the Space Force. And senior leaders from each of the space organizations within the four other DoD services would be selected to form the Headquarters Space staff in the Pentagon.

This sixth service could be expected to provide exceptionally qualified warfighters to the newest combatant command, and they would arrive organized, trained and equipped with the same standards and guided by the same doctrine. Lean, responsive, and effective, the Space Force, Space Command, and the SDA could be created by adding fewer than five thousand additional military and civilian personnel to the defense workforce, no new basing requirements, few additional supporting structures , and an overall additional annual personnel cost of less than $500 million—less than one-hundredth of 1 percent of DoD’s current budget.

The groundwork is underway. By the end of 2019, Congress will have everything it needs to make a solid decision on the way ahead for America’s space capabilities within the Department of Defense. Biases and politics aside, that decision should be an easy one.

John Venable is a senior research fellow for Defense Policy in the Davis Institute for National Security and Foreign Policy at The Heritage Foundation.