The U.S.-UK Special Relationship after the Fall of Kabul 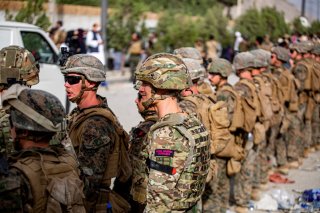 Something happened last week in the House of Commons that would have been unfathomable to Winston Churchill. The President of the United States was held in contempt by the Mother of Parliaments for his catastrophic withdrawal from Afghanistan and his open disdain for the nation that is America’s most important cultural and strategic ally.

That Joe Biden is anti-British is no surprise. The fact that Great Britain and the United States have formed a historic continuum of global cultural, military, and economic supremacy for the last 400 years has been a source of permanent angst amongst the Obama-Corbyn-Biden Left. They are convinced that Anglo-American “imperialism” is the source of all the planet’s woes.

Barack Obama’s first act as president was to remove the bust of Sir Winston from the Oval Office. He then worked with Eurocrats to scuttle the United Kingdom’s bid to free itself from the sclerotic and anti-liberty European Union. His State Department told the British ambassador that his nation was just one of hundreds America deals with and that there is no special relationship.

Joe Biden took a different tack. An appeaser of the Irish Republican Army for several decades, he opposed the extradition of Irish terrorists to Britain. This June, in a face-to-face meeting with British Prime Minister Boris Johnson, he flabbergasted his British counterpart by not seeming to comprehend that Northern Ireland is a constituent part of the United Kingdom—not a province of the Irish Republic.

He then topped that performance by having his administration issue an insulting diplomatic reprimand to London and threaten to put a hold on a U.S.-UK trade deal if the British government did not submit to EU demands over the Northern Ireland protocol—the kind of treatment The Heritage Foundation’s Nile Gardiner said, “is normally dished out to enemies of the United States, such as Russia, and hardly ever issued against a close ally.”

When Biden decided to pull out of Afghanistan, he didn’t bother to consult with our British allies over the timing of the withdrawal. He then refused to accept Boris Johnson’s calls for 36 hours after Kabul fell to the Taliban.

More than 450 of Her Majesty’s troops gave their lives in Afghanistan fighting alongside Americans, just as they did on the Western Front, Normandy, and Korea. Yet that was not enough to warrant a simple phone call.

For eighty-plus years, the U.S.-UK alliance has selflessly offered a helping hand to all the peoples of the free world. Nothing in history compares to it. And Joe Biden is ripping it asunder.

Perhaps this callous disregard for our partner is due to the British Conservative Party’s refusal to accept the Biden administration’s woke agenda. Perhaps the White House is offended that Boris Johnson will not apologize for a nation that gave the world a common language, its first notion of individual rights, the rule of law, and representative government, and which has lifted millions from poverty by championing free trade and market capitalism. This is an administration contemptuous of British pride in an empire that in its final decades saved Western civilization alongside the United States.

In the twentieth century, the might of the British Empire that reached every continent and ocean slowly transferred to the young American colossus with its limitless manpower and industrial genius. Britannia ruled the waves and so would the United States. America accepted the mantle of freedom selflessly handed to us by a proud friend… until the Obama/Biden administration took the reins of power.

Churchill’s epic A History of the English-Speaking Peoples, written in the midst of the Cold War concludes with this:

And this is not the end. Another phase looms before us, in which alliance will once more be tested and in which its formidable virtues may be to preserve Peace and Freedom. The future is unknowable, but the past should give us hope.

The United States and Britain remain the world’s last best hope. As Andrew Roberts states in his addendum to Churchill’s masterpiece, if another power or powers should replace the Anglo-American tradition, “the human race will come to mourn the passing of this most decent, honest, generous, fair minded and self-sacrificing imperium.” The president of the United States should think about that.

A former Under Secretary of Defense, Robert L. Wilkie is a visiting scholar at The Heritage Foundation’s Center for National Defense.