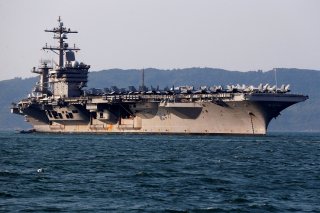 After nearly nine months at sea, the aircraft carrier USS Carl Vinson is back in its homeport at San Diego.

The USS Carl Vinson undertook exercises alongside the navies of the United Kingdom, New Zealand, the Netherlands, India, Germany, Canada, and Australia.

“Alongside our partners and allies, we have aggressively pursued every opportunity to elevate our combat readiness in a drive to continue upholding regional stability,” said Rear Adm. Dan Martin, commanding officer of the Carl Vinson’s strike group. “We’ve been doing this for 75 years and I’m proud to say that our team has relentlessly paid tribute to this legacy with many long hours of sweat and determination that started well before we left San Diego.”

The Wave of the Future

The USS Carl Vinson is the first United States Navy carrier to fly with a mix of fourth- and fifth-generation aircraft on board, what the Navy calls the “Air Wing of the Future.” This mixed force includes F-35C Lightning IIs, CMV-22B Ospreys, F/A-18E/F Super Hornets, EA-18G Growlers, E-2D Advanced Hawkeyes, MH-60R Sea Hawks, and MH-60S Sea Hawks. The Navy expects the Air Wing of the Future will also include MQ-25 Stingray unmanned aircraft system in 2025.

The new air wing comes from the recognition that the Navy faces new challenges than in the past.

“This is just a complete change – the near peer competitor with activity that is in the air, on the surface and the sea and below the surface and the sea,” Martin said, according to USNI News. “And it’s a constant all the time. So you have to shape the air wing… to best handle that activity. And we’ve made some recommendations to what we can do better in that regard.”

Paired with the CMV-22B Osprey, which can ferry men and material between carriers and other flattops, and at night and unassisted by arrestor wires, the “air wing of the future” is shaping up to be the most capable American carrier in history.