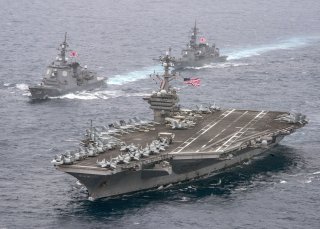 The sailors of the U.S. Navy's USS Carl Vinson (CVN-70) were treated to a special Valentine's Day as the Nimitz-class aircraft carrier arrived in her home port of San Diego. According to local media reports, hundreds of sailors lined the perimeter of the flight deck shortly before noon on Monday as the ship made its way through San Diego Bay to its berth at Naval Air Station North Island. The carrier's arrival was also accompanied by a military flyover.

The carrier and her strike group – Carrier Strike Group (CSG) 1 – had been deployed since early August in support of global maritime security operation, during which time it took part in Large Scale Exercise 2021, a live, virtual, and constructive, globally-integrated exercise that spanned multiple fleets and regions.

While deployed, the strike group also operated in some of the most heavily navigated waters of the Indo-Pacific including the South China Sea and the Philippine Sea.

"The tireless dedication and professionalism of our Sailors, through a global pandemic, challenging operational tempo, and sacrificed time away from family, is truly humbling," said Capt. P. Scott Miller, commanding officer the Vinson, in a press release. "Their efforts have demonstrated flexibility and resiliency and ensured mission success in every task. They have directly supported a free and open Indo-Pacific and have underscored our Navy’s readiness, strength, and lethality."

During her deployment to the U.S. Indo-Pacific Command, USS Carl Vinson successfully integrated with allied and partner warships. That include operations with the Japan Maritime Self-Defense Force, while the carrier took part in a joint exercise with the U.K.-led multi-national Queen Elizabeth (R08) carrier strike group and last month operated with two U.S. Navy big-deck amphibious warships.

"As far as how it (the F-35C) operated on the carrier, we did a lot of time and effort put in to making sure that it could operate, and that it could be sustained and maintained," Miller told USNI News. "And I'll tell you it hit all the marks that it sought to achieve. It was seamless from an aircraft carriers perspective, as far as how it integrated into the traditional air wing. And so we had no issues with it."

The carrier also deployed with two additional EA-18G Growlers electronic attack aircraft for a total of seven, instead of the typical five The Growlers reportedly proved useful when operating with the F-35C – highlighting how the Navy can successfully operate fourth- and fifth-generation aircraft from its carriers.