The USS Constellation was ‘America’s Flagship’ 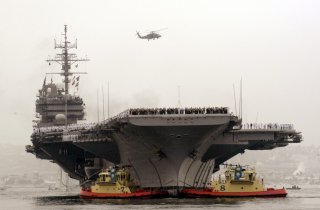 Construction of the warship—which was among the last class of conventional-powered aircraft carriers built for the U.S. Navy—began in July 1956. However, just four and a half years later, a tragedy struck when a catastrophic fire caused the loss of fifty workers and resulted in $75 million in damages. Following a delay to repair the damage, the carrier was delivered on Oct. 1, 1961. She was commissioned on Oct. 27, 1961, and officially entered service a year later, and was among the three Kitty Hawk-class carriers to take part in combat operations during the Vietnam War.

Aircraft from the carrier flew air sorties to pound roads, bridges and other targets to attempt to impede the flow of men and war materials south. Additionally, the F-4B aircrew of pilot Lt. William M. McGunigan and radar intercept officer Lt. (j.g.) Robert M. Fowler from Fighter Squadron (VF) 161 shot down a Mikoyan-Gurevich (MiG) 17 Fresco on July 13, marking the ship’s first MiG kill of the war. After the war, in 1975, she was redesignated as a multi-purpose carrier as CV-64, and would serve in that capacity for the next three decades.

During a visit to USS Constellation, then-President Ronald W. Reagan proclaimed the carrier “America’s Flagship” while presenting the crew a presidential flag in 1981. Six years later, as preparations for a 1987 deployment proceeded, it was announced that USS Constellation had earned the coveted Pacific Fleet Battle Efficiency Award (Battle E) for the eighteen-month period ending on June 30, 1986. Constellation received her $800 million service life extension program (SLEP) in Philadelphia from 1990 to 1992.

The carrier was halfway between Pearl Harbor and San Diego the terrorist attacks on New York City and the Pentagon occurred on Sept. 11, 2001. The carrier completed her scheduled deployment but following an abbreviated turnaround cycle took part in her final deployment in the early stages of the Global War on Terror and supported combat operations during Operation Enduring Freedom. She later served as a “night carrier” and remained on station during the opening stages of Operation Iraqi Freedom in March 2003.

Later that year, on August 7, 2003, USS Constellation was officially decommissioned after forty-one years, nine months and eleven days of naval service. Since her commissioning, nearly 120,000 Sailors and Marines had served aboard the ship, while the arresting gear aboard had amassed an impressive 436,000 traps or landings. She was sold for scrapping, which was completed in May 2017 when the last propeller shaft strut was pulled from the water.